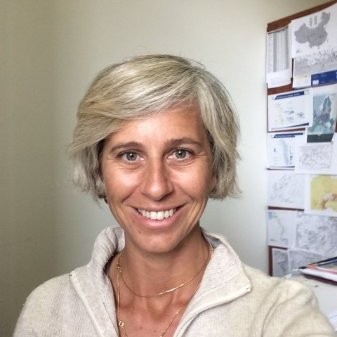 Hilda Ghiara is Tenured Researcher and Professor in Maritime Traffic, Ports and Regional Economies at University of Genoa (Italy). She has been member of AIVP network of experts for almost 10 years. She attended on July 2, the AIVP webinar on Port Centers and provides a perspective that complements the webinar quite well. Read her opinion below. There are two issues that I believe will be very important for the Port Centres in the years to come:

As far as the first issue has always represented a central aspect of the Port Centres’ activity, it is evolving rapidly. The Port Centre of Genoa – at its opening in 2009 – used as an iconic image the list of port jobs in order to stress the following message: the port is not only dockers but also freight forwarders, shipping agents, customs officers, pilots, captains, yacht captains, terminal employees, teachers, journalists, brokers, insurance brokers, harbour masters, coastguard employees, shipbuilders, ship chandlers, craftsmen, IT specialists, engineers, etc. The idea was to point out the knowledge economy in order to understand its characteristics and criticalities with reference to the port sector; in this sense, exploratory experiences related to the concept of knowledge port have been developed by Port Centres around the word during the past years (see for example the “port of knowledge” project). It’s been a long time, but I think a deep understanding of this topic is still to be developed. The focus is still on automation, but innovation dynamics are wider. In a sharp comment on the WEF -Future of Jobs document (2018), Sergio Bologna highlights the change of technological paradigm from automation to connectivity, something quite different. The kind of innovations in which companies intend to invest (more than 80% of the companies analysed in the document) are jobs related to AI, IoT, etc. Therefore, directly linked to the concept of connectivity rather than automation.

The focus on future labour skills linked to innovation is also linked to the role of logistics planning, particularly where market players might not be incentivised to consider the overall impact of certain strategic solutions. In fact, the potential benefits of promoting alternative technological solutions should push regulators to assist such planning, especially if long term implications are taken into consideration (e.g. the new business models in terms of needed future labour skills, the impact of automation and connectivity, the related environmental challenges).

Port Centres should play a specific role on these central topics, stimulating the debate and promoting info collection grounding on their cultural role and their symbiosis with ports in the different cities. The data on maritime traffic, port movements, etc. are data widely available and on which a lot of critical and interpretative work is carried out thanks to active scholars and operational subjects. The production of knowledge on the quality of port and logistics jobs, on the critical aspects linked to the remuneration of intellectual work are instead central to the very idea of Port of the Future and should find their place in the Port Centres agenda.

The decoupling of local and global effects in port cities is nowadays widely discussed in academic context and is increasingly emphasised in the experiences of individual cities. Port Centres have always been focusing on the criticalities originated by this phenomenon, grounding on the idea that through an effective communication activity the ports’ bad reputation could be overcome. From the beginning, the main challenges for Port Centres were to overcome the bad reputation of ports as a disturbing element to the tourist harmony of the cities and to enhance its functional and economic integration into the urban context. A common element in these years has undoubtedly been the possibility to make explicit a didactic and cultural – if not even touristic – value of the port itself. But the challenge of the port’s good reputation is complex and ambivalent. The themes involved today are many, some more explicit and others still to be explained. Certainly, the emergence of sustainability (environmental, economic and social) has dictated a specific agenda for ports. The institutional work of initiatives such as the AIVP Agenda 2030 or WPSP (World Port Sustainability Program) is very important and more and more attempts are emerging to make these principles concrete and tangible through innovative practices (see the EU “Port of the Future” programme being implemented in these years). Another central aspect is the analysis of the impacts of hinged logistics chains on ports, in this perspective digitization is proceeding fast but often without an analysis of the real impacts on territories in economic terms. Also, the division of positive/negative externalities between the different areas and actors involved is still unclear. Many scholars and practitioners have begun to formulate analyses and balance sheets and Port Centres can play an important role in promoting and disseminating these reflections, able to overcome simplifications and slogans.

Reputation, however, is also the responsibility of ports in the shipping industry. The past development of the cruise industry and the growth prospects (data on market growth margins) for example have been celebrated for its alleged economic impact but is still very critical in its relations with the cities (see for example the heartfelt and direct intervention of the North Adriatic Sea Port Authority President at the Cartagena Cruise dialogue 2020). Certainly, part of the reputation is linked to the negotiating ability of the cities and their ability to manage irreplaceable goods such as urban historical centres in their brazen and authoritative contrast with the anonymous standardization of the immense cruise ship.

Finally, is worth mentioning a yet unexplored issue of the social responsibility of ports about goods in transit. Interesting from this point of view are some recent actions carried out in French and Italian ports aimed at drawing attention to the role of ports in the transit of military equipment destined to war places where human rights are disregarded. In short, in this perspective the ultimate target of social sustainability is human rights and not just the type of goods that are used against those rights. These initiatives place new and tough attention on the relationship that exists, not so much between ports and number of containers, but between ports and goods in transit. A normative perspective that beyond the political character of these actions leads to a useful reflection for logistics chains in general.