Tackling the issue of rising sea levels and the risk of coastal flooding.

Port cities were originally founded in commercially strategic locations, and environmental considerations were not taken into account. Although subject to much debate, studies of climate change and rising sea levels have highlighted the vulnerability of coastal areas and many port cities around the world. Waterfront areas and those where cities and ports meet are at particular risk, and can serve as testing grounds for resilience strategies inspired by natural functions.

In 2015, the City of Boston organised « Living with water », an ideas competition looking ahead to 2100 focusing on three specific sites. The three winners were named in June 2015. The Climate Ready Boston report, carried out in 2016, predicted that sea levels could rise by 9 inches (22.86 cm) by 2030 as compared with their 2000 levels, by 21 inches (53.34 cm) in 2050 and by 36 inches (91.44 cm) in 2070. In October 2017, the City unveiled an action plan to tackle the problem and provide short and long term protection for the waterfront areas most at risk, including the heavily populated districts of East Boston and Charlestown. In these two sectors, a nine inch rise in sea levels would increase the current 1% annual flood risk to 4 or 5%. Proposed solutions include the creation of public spaces to increase the amount of permeable land area, or raising the level of roads, parks, squares and promenades. The measures would also help mitigate other effects of climate change, such as heavy rain or extreme heat. In addition, the plan represents an opportunity to restore access to the waterfront, which would be used for social and leisure activities while offering views of the port. A movable barrier is also being considered as a short term strategy. It could be completed by a vast levee in the port of Boston. As part of the plan, a cost-benefit analysis has been carried out, and a calendar of the various short and long term measures has been put together. The local community has been widely consulted on the project: residents, associations, interest groups, public sector bodies (City departments, regional and national agencies), non-profit organisations, private landowners, etc. Another report concerning the Downtown Boston and North End areas was released in September 2020. 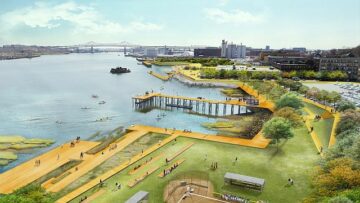 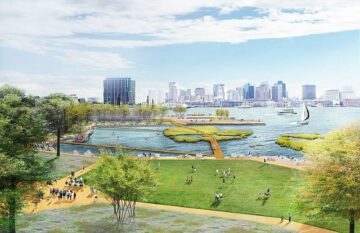 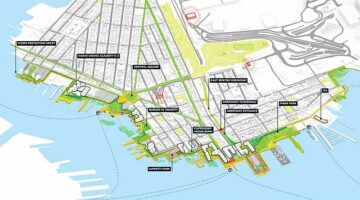 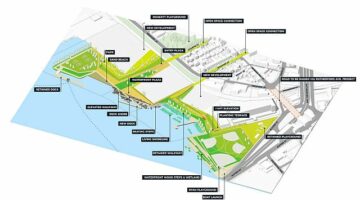 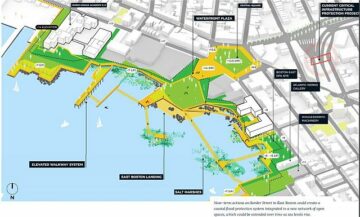 Boston (USA): living in harmony with the water

Including joint City Port measures to prevent inundation and flooding of the port and connecting infrastructure in strategic planning documents, and through a suitable land management policy.