Striking the right balance between the spatial needs of the port and city.

Mix of urban and port functions

The mix can be either a horizontal mix that relies on a juxtaposition of functions, or a vertical mix that combines, within a single venue, both port and urban activities. This later solution, which is still not often seen, is particularly suited to passenger terminals. It also offers the added advantage of requiring less physical space. In both cases, the mix of urban and port functions will be an added attraction for the site. It will reinforce the site's identity and its attractiveness, both to economic stakeholders, and to the general community.

Vertical mix: « Terrasses du Port », which offers passenger reception facilities, a shopping centre, and scenic views of the port, was inaugurated in late May 2014. On the 23,000 m² ground floor, the entrance to the shopping mall coexists with various port functions (passenger boarding areas, vehicle storage, etc.). Underground, there are 3,000 parking places in 6 levels. A total area of 61,000 m² is occupied by 190 shops located mainly on Levels 1 and 2. In level 2, there is also a 260m exterior promenade overlooking the Marseilles roadstead and port activities. There are offices on the 3rd floor of the mall. A terrace of 1200 m² which can be rented for holding events completes the installations. Hammerson, which operates the shopping mall, has a long-term occupancy agreement with the Grand Port Maritime de Marseille (GPMM). The port of Marseilles continues to become integrated with the city and to offer a number of urban functions, without sacrificing its own ground-level activities. It also generates revenue from renting spaces for ground-level activities. 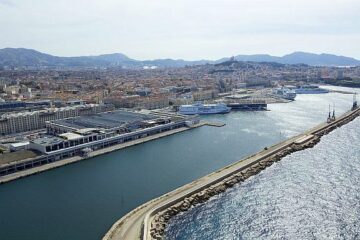 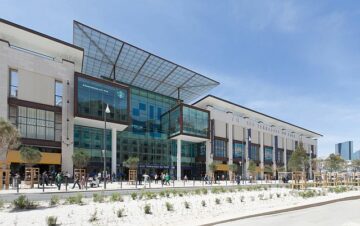 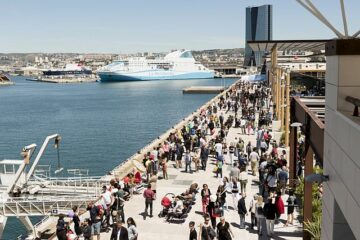 Adopting a land management policy that strikes a balance between urban uses and the active port, especially on the waterfront.

Marseilles (France): a landscaped boulevard for the entire waterfront

The demolition of a highway overpass which separated the Joliette Docks from their maritime façade, […]