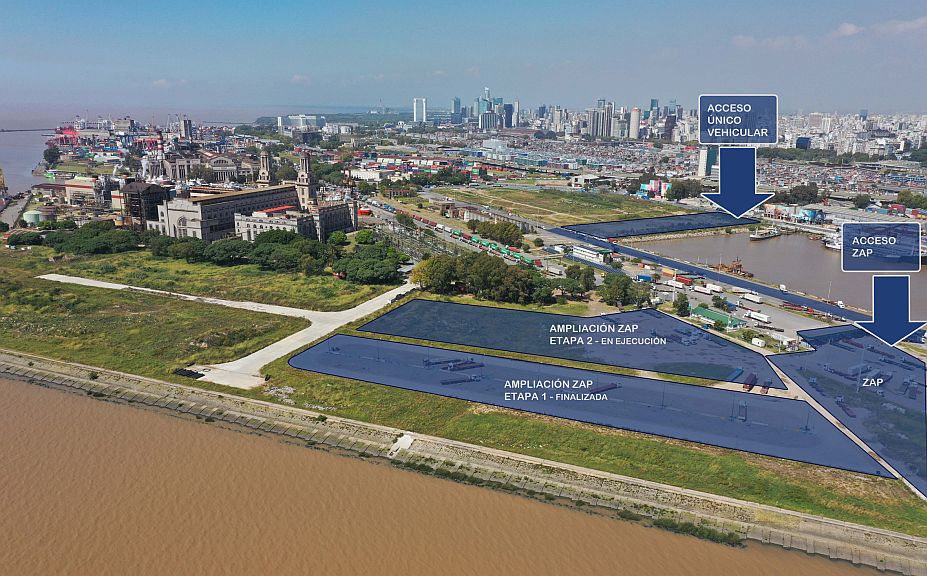 Waterfronts are highly coveted areas by all stakeholders in port cities. For port authorities and companies they are a necessary space for their function, for the real estate market it is a very attractive area for new housing developments and for the inhabitants they are ideal areas for new public spaces.

Responding to all these ambitions is complex, therefore, for an innovative port-city governance, it is necessary to develop a balanced territorial policy between urban uses and active port, especially on the waterfront.

In this article, Flavio Galanis of the Port of Buenos Aires explains how this is being achieved in the Argentine case.

Puerto Buenos Aires is a member of AIVP

With the deregulation of Argentinean ports in the 1990s, private ports started to appear and operation of the Buenos Aires terminals was let out on concession. The transfer of the bulk terminal further up-river, closer to production centres, allowed Buenos Aires Port to clean up its operations and reduce its negative impact on the city, avoiding the dust, spills and noise inevitable in bulk cargo operations. The Port meanwhile specialised in containerised cargo and passengers, the latter being an industry that was insignificant 25 years ago. Not only is the presence of big cruise ships attractive for the city’s inhabitants, but it is also compatible with the tourism offer of any big city. Furthermore, the conversion of the old Puerto Madero, south of the current port perimeter, modified the dynamic of this part of the city, requiring more of the Port Authority’s attention.

In this context, one of the great barriers to connecting citizens with the port environment and the waterfront, and the one which perhaps raises the greatest apprehensions, is the movement of heavy goods traffic on urban arteries, due to the congestion and the sound, visual and air pollution that it causes.

In the case of Buenos Aires, this is especially significant due to the city’s extensive terrestrial links with its hinterland. The city was originally Argentina’s principal point of contact with Europe, so every road and railway that was built during the development of the country’s transport infrastructure converged on its port.

In recent years, the construction of the final section of the city’s ring-road, Paseo del Bajo (for which the Port had to give up one third of its land), completed a network of highways which links Buenos Aires Port directly with the city’s North, West and South accesses. The network, built to take heavy trucks, can comfortably accommodate a mean flow of 4,000 trucks per day.

It should be noted that Buenos Aires Port is the only port in the country for which the Port Authority comes under the Federal Government, because of its importance as a gateway receiving cargo from, and distributing cargo to, every part of the country. It is therefore a strategic element of the national logistical chain. As part of an autonomous city, it needs to ensure that the activities of a port can be amicably combined with those of a great city, and to consolidate the citizens’ relations with their coastline and the origins of their city. Commitment to this policy can be read in every strategy guideline drafted by the Port Authority, and is also reflected in measures like its ratification this year of the “AIVP 2030 Agenda“, formally adopted by Resolution 21-AGP.SE-2021. The contents of this article relate fundamentally to objectives 4 (especially “4.5: Adopting a land management policy that strikes a balance between urban uses and the active port, especially on the waterfront“) and 9 (“Improving living conditions for residents of port cities and protecting their health”) of the AIVP Agenda.

For more than 8 years, following its Infrastructure Master Plan and its own guidelines on land use, Buenos Aires Port has been shifting its cargo activities to the northern part of the land under its control, since these operations are more suited to the heavy industrial character of that area. This land, reclaimed from the river, offers possibilities for growth and flexibility. It contrasts with the more urban and touristic character of the southern part, allotted to passenger reception and the flexible mixed-use zone which will buffer and permeabilise co-existence between port and city.

Here we will concentrate on the transformation of the northern sector and its waterfront.

Ports are generators of large volumes of heavy traffic, and their access routes must be designed to absorb these flows without prejudicing normal traffic and the residential surrounding areas; these are especially sensitive when the port is set in a large city.

For this reason, one of the main projects in the Works Plan is the Land Transport Access Node, designed to concentrate road and rail links in the northern sector. The flow of heavy traffic from the highway will be administered on Port land, without ever passing through the city’s streets; the administration will be handled in the Port Support Zone (Zona de Apoyo Portuario – ZAP).

The ZAP is an annex area which acts as a lung; its main function is to provide a buffer zone in which traffic to and from the terminals can park and traffic flows can be organised. It also serves as a waiting area for trucks that need to carry out documentation, that have got ahead of their designated turn, or that are awaiting a work order; these trucks used to have to find a parking space in city streets.

Buenos Aires Port also has the best rail connections of any port in the country. There is a single direct access into the port serving all the goods lines in operation, allowing loading and discharge directly onto the container handling area. Encouraging the use of rail transport implies fewer trucks on the roads, and more efficient – and cleaner – use of resources.

The scheme is complemented by remodelling of the waterfront into a promenade for the public, restricted to pedestrians and sustainable transport.

The complexity of the project implies a variety of works, often with overlapping execution, including:
⦁ demolition of interferences (disused buildings and facilities which block routes or hinder traffic flows) ;
⦁ development of new spaces reclaimed from the river to reorganise port land and allow more direct access, with waiting areas. This involves the construction of containing works; the delivery, treatment, compacting and levelling of landfill; construction of drainage, fences, etc.

⦁ opening of roads, vehicle parks and supply areas, including installation of mains services, drainage, paving, lighting, etc.
⦁ railway works to encourage the use of rail services without extra cargo handling, minimising the number of trains passing over urban common land, so that containers are moved from the flatcar directly to the wharf or the container handling area.
⦁ generation of leisure spaces along the waterfront as a buffer zone between urban and port uses and recovery of these spaces for the public; construction of pathways, cycleways, urban furnishings, lighting, guardrails, vegetation, etc

On completion of the works, an area of approximately 5.5 hectares will be available for heavy traffic organisation, classification and waiting inside the port, not counting roads. Furthermore, the filling-in of Dock “F” will create an additional 8 hectares at the point where the port meets the city.

More than 15 million dollars have been invested to date, and the current state of the works can be seen in the photographs below.

Buenos Aires: road-building as a factor for urban integration and Port-City co-existence