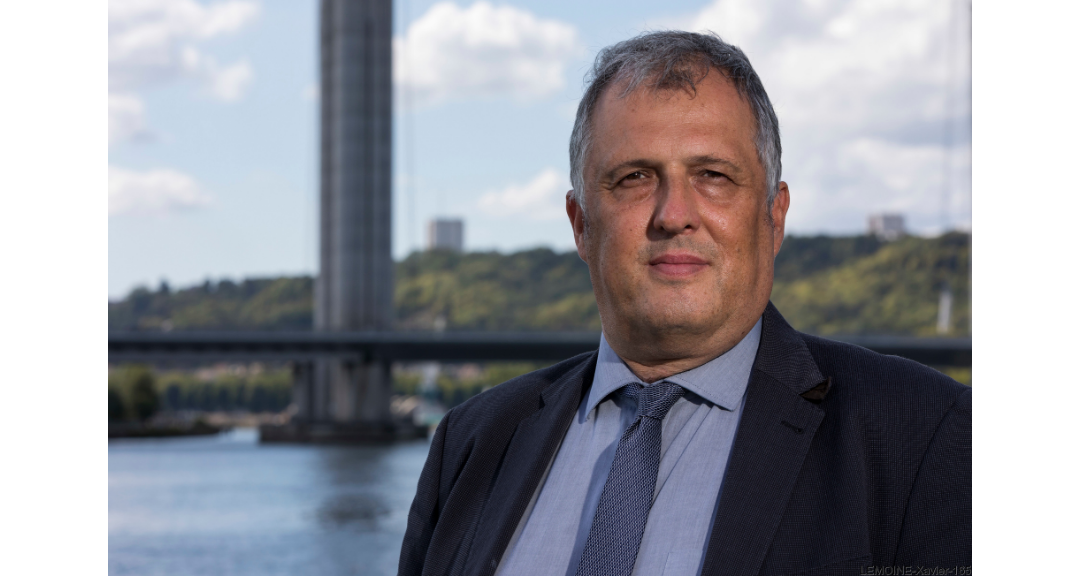 HAROPA – Port de Rouen occupies a site along the Seine, from the river mouth on the English Channel to the city of Rouen, 80 kilometres inland. Maritime and river traffic is crucial for Rouen, and accounts for the wide diversity of activities present in the city, from cruises to cereal export. One of the biggest challenges is preserving quality of life for the hundreds of thousands of people in the vicinity of the port installations.
Incidentally, “Quality of life” and “Health” together form Goal no. 9 of AIVP’s 2030 Agenda. Keen to highlight best practices in this area, we spoke to Mr Xavier LEMOINE, Director of Territorial Development and Environment at HAROPA – Port de Rouen.

HAROPA – Port de Rouen has been an active member of AIVP since 1989.

AIVP – You recently announced that the EU Commission is set to co-fund your plan to install quayside cold ironing terminals at your facilities along the Seine. Another project to create an electric-powered river shuttle between the two banks of the Seine has been tested in Rouen since 2019, and represents another best practice for cutting CO² emissions.
What are you expecting from these two initiatives? And more generally, what is your strategy for continuing to reduce air pollution?

Mr Xavier LEMOINE, HAROPA – Port de Rouen – Reducing not just air pollution, but also greenhouse gas emissions, is an important goal in the fight against climate change. One of the key planks of HAROPA – Port de Rouen’s environmental policy is devoted to the energy transition The Port of Rouen plays a crucial role in promoting sustainable mobility and modes of transport, and is behind a number of initiatives aimed at meeting that objective.

To that end, we work to promote:
– Clean modes of transport. Firstly by introducing a bonus arrangement for fees as part of the ESI (Environmental Ship Index), which measures the environmental performance of seagoing vessels (CO2, SOx and NOx emissions) according to IMO rules. In 2013, HAROPA – Port de Rouen decided to reward shipping lines which operate the most environmentally-friendly vessels in Rouen. Secondly, by carrying out studies and discussions with the stakeholders concerned about providing low-carbon and carbon-free energy sources such as LNG, hydrogen, etc. at the port, to refuel ships or other means of transport.
– Modal shift by introducing targeted financial incentives
– Massification of the flow of goods
– Services for docked ships, such as cold ironing for river goods convoys, which can replace on-board generators. In 2018, the Port of Rouen installed two terminals for freight shipping at the city quays, and is planning to gradually roll out a total of 17 terminals on the quays and at terminal buildings which house major river services.
Other initiatives undertake include:
– Developing renewable energies on port land and buildings, especially solar power (solar farms, roof panels, etc.).
– For the Port of Rouen’s own resources, renovating port buildings and hangars to make them more energy efficient, introducing the Business Travel Plan and in particular managing the fleet of vehicles, with the purchase of a number of electric vehicles.

AIVP – There have been a number of industrial accidents in European port cities in recent years. One of the biggest challenges for the authorities is to gauge pollution levels and tackle their potential impact on human health.
What can a port like HAROPA – Port de Rouen do to help improve safety standards and ways of cutting pollution?

Mr Xavier LEMOINE, HAROPA – Port de Rouen – In terms of regulations, the port authority is not moving to set standards or processes. Government departments, and in particularly the DREAL (Regional Directorate for Environment, Development and Housing) and DDTM (Local Department for Territories and the Sea), play a full part in terms of issuing recommendations and monitoring port projects or industries, to ensure that standards are properly met.
In the case of the Lubrizol and Normandie Logistique fire, there was total cooperation by the different departments of HAROPA, the State, the port (boatage, towage), and all of the parties called upon to tackle the fire, and to limit and eliminate pollution in the Bassin aux Bois basin.
In March 2020, the Port of Rouen also signed a new partnership deal with the SDIS 76 to improve the boats and nautical resources available to the emergency services, and to take account of newly identified requirements, such as providing assistance and rescue for river cruise vessels, an activity that has been growing in recent years.
The Port of Rouen, and more particularly the Harbour Master’s office, are called upon to act as intermediaries with the emergency services and the Prefecture.
HAROPA – Port de Rouen is supportive of efforts to create a network of local stakeholders in the port community, aimed notably at strengthening the safety culture, following the example of the association Synerzip at the port of Le Havre. The Port of Rouen is keen to bring together port businesses to develop an organisation of that kind in our own territory.
Over its four major port zones – Rouen and the conurbation, Saint-Wandrille, Port-Jérôme-Radicatel, and Honfleur -the Port also has an important role to play in relations with the customers who use its land and facilities. We require local users to take account of the characteristics of the land made available to them, to ensure it is returned to us in its original state. There are also environmental incentive clauses to encourage them to go beyond the regulatory requirements and do more to protect the environment.
We are committed to constantly improving our local territory, setting aside more and more resources to achieve that goal. This also enables us to identify plots of land affected by pollution, and to deal with it.

AIVP – At the beginning of 2020, cruise ships were scheduled to call at Rouen 28 times, and 57 at Honfleur, at the mouth of the Seine. However, your “Green Port” strategy prioritises environmental issues, which could lead to restrictions being put in place.
How do you reconcile the growth of cruise activity with your environmental commitments?

Mr Xavier LEMOINE, HAROPA – Port de Rouen – HAROPA – Port de Rouen lies at the heart of a hinterland with a rich tourist offering, with easy access to Paris, Giverny, Honfleur, the D-Day beaches, and so on. As such, the Port plays its part in making the Seine Valley a tourist destination. Today, the Covid-19 crisis is having a severe impact on the maritime and river cruise industry.
HAROPA – Port de Rouen is positioned in a “high-end” niche market for sea and ocean cruises. It can accommodate liners up to 260 metres in length, and has two cruise terminals, one in Rouen and the other in Honfleur.
The fleet of river cruise boats operated by companies from various countries (France, Netherlands, Germany, Switzerland, Australia, US) is growing steadily, allowing for a bigger range of products and more passengers. The current ports of call within the Port of Rouen’s territory are Honfleur (popular with the Paris-based operators), Caudebec-en-Caux and Rouen.
Building on the process of reflection undertaken concerning electricity terminals (see the first question), HAROPA – Port de Rouen has joined forces with VNF to carry out a feasibility study aimed at identifying the requirements of river-going passenger vessels, and defining sites and facilities of an appropriate size for the networks. The work was approved and adopted by the EU Commission for co-funding. This deployment will enable us to support river cruise vessels, whether as a port of call or for wintering. It will be fully effective by the end of 2023 when HAROPA – Port de Rouen gets five terminals (two for stopovers and three for wintering).
Also, for ocean liners, the Port is considering installing the necessary equipment at its port quays and terminals to supply electric power to vessels and eliminate the need to use on-board generators. This will require very high levels of power and a great deal of work with the cruise operators, and could be in place at the Rouen and Honfleur terminals by 2025.

AIVP – Ports are also responsible for water courses within their area, and in the case of those like Rouen which are both seaports and inland, that means both fresh water and salt water courses. This particular situation, on both the river and estuary, makes the issue of water management all the more important.
Can you give us some details about water management at HAROPA – Port de Rouen?

Mr Xavier LEMOINE, HAROPA – Port de Rouen – The Port of Rouen is a seaport whose territory encompasses the Seine estuary from Rouen to the Channel.
It contributes to efforts aimed at improving knowledge of the estuary ecosystem by participating in estuary research programme as part of the GIPSA (Lower Seine Public Interest Grouping), which includes a number of local stakeholders (local authorities, water agency, industrial operators, etc.). For example, they are currently looking at the impact of the rising level of the Seine due to climate change.

The Port is also working in partnership with the GIPSA, the M2C Laboratory at Rouen University, and research institute IFREMER, to create a continuous monitoring system for the Seine estuary, called the SYNAPSE network (Automated System for Physical-Chemical Surveillance of the Seine Estuary). The network aims to allow better monitoring of water quality parameters (turbidity, oxygen levels, pH, conductivity, salinity), while improving the way the estuary system works in terms of sedimentary hydrodynamics. The network’s architecture is based mainly on infrastructures provided by the Port of Rouen, namely the use of tide gauges and the deployment of multi-parameter sensors over the period 2014-2019.
The Port also monitors the impact of its activities by introducing surveillance of numerous environmental criteria, notably for dredging (benthos, fish, chemical quality of water and sediments, bioaccumulation, etc.).
It is working to improve maintenance practices (aiming to eliminate the use of non-organic phyto-sanitary products, differentiated management of green spaces) and develop the sanitation and rainwater treatment networks present in the port community.
In terms of biodiversity, the Port is engaged in a number of initiatives to restore ecosystems, promote wetlands, and improve their ecological functions. In particular, it is promoting the creation of riparian buffer zones and floodable wetland areas, and the link with the river. Examples of this type of eco-restoration project carried out recently by HAROPA – Port de Rouen include the Lillebonne basin and Les Petits Saules in Sahurs.