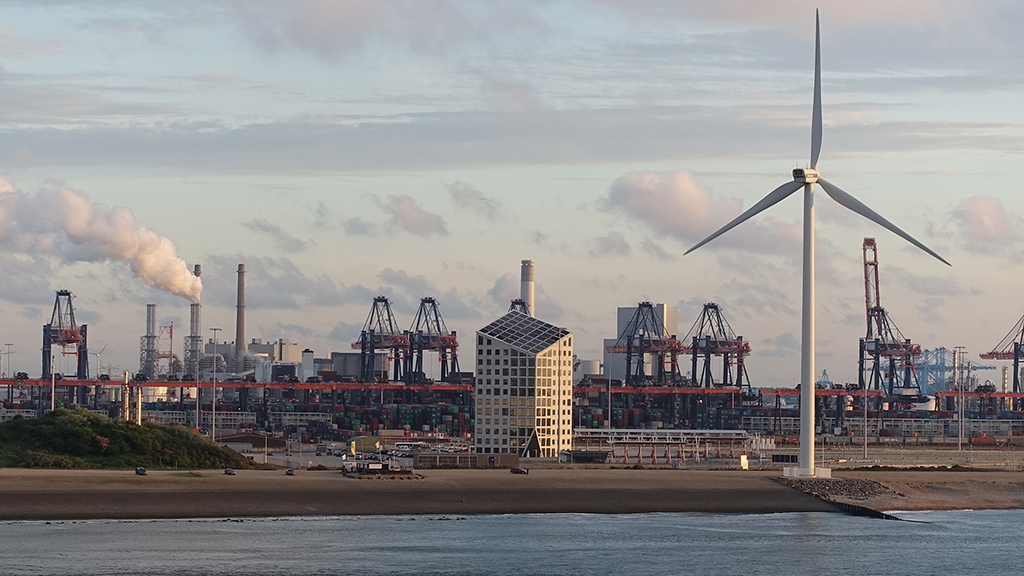 Goal 2 of the AIVP Agenda 2030 focuses on the Energy Transition and Circular Economy, this will also be the topic we will discuss for the coming weeks. In this article, expert Paul Tourret explains the role of port cities in the process of changing energy consumption and finding sustainable alternatives.

The combination of environmental pressure and the urgent need to save energy is both a constraint and a stimulus for maritime and port industries. A new cycle of innovation is taking shape. The ships and ports of the future are gradually emerging, although the path ahead remains tricky, with immature technologies and imperfect solutions. Nonetheless, the process of research, testing and operational deployment is moving quickly. In this context, city-ports with their economic and operational maritime transport roles, will be the nerve centres of a dynamic 21st century.

It is plain to see that this is a formidable time for the maritime industries. But not because of the sheer scale reached by sea-going transport with economic globalisation. The Ever Given incident in the Suez Canal was a high-profile sign of the importance of maritime trade. What makes this current period formidable is the great cycle of innovation sweeping through the entire maritime ecosystem. In recent years, the technological 21st century has got into gear to revolutionise ships. The trends established in the fifties and sixties, and which saw vessels continue to grow and grow in size over the following decades, now need to change.

The maritime industry is focused on the future, perhaps as never before. There are myriad stakeholders concerned, ranging from shipyards and owners, to classification societies, energy operators, engine constructors, and ports. Each one is working on this new cycle of innovation. Naturally, the change has not come by itself. Generally speaking, maritime transport evolves according to economic demand and regulatory conditions. In the past, ships have changed as a result of disasters and large-scale pollution. Today, that process of evolution is being guided by climate change.

With its emissions of fine particulate matter, certain greenhouse gases (SOx, NOx) due to the use of heavy fuel-oil, or simply CO2 from thermal combustion, maritime transport is the subject of intense environmental attention. It is responsible for 7% of all final consumption of oil and 3% of all CO2 emissions generated by human activity. That is perhaps a marginal proportion, but in one of the sectors with the potential to be transformed most easily. Maritime transport must and will change. Rules laid down by the International Maritime Organization and the European Union are there to guide it. The most ambitious concerns mass decarbonisation over the next half-century.

There is one reason for change, however, that must not be ignored: energy savings. The maritime industry knows that oil can become highly expensive (again). It is not unrealistic to imagine that the oil price could return to $100/t in the medium term. An increasingly energy-hungry world has consequences, and so maritime transport must consider more economical means of propulsion. Efficiency is the order of the day, and concerns both air pollution and fuel use.

It is without doubt the biggest advantage of the change. Certain activities are trying to slow the imposition of environmental restrictions, which represent an operational burden. Maritime transport can absorb it, as controlling it has implications for the sector’s future profitability. Greener transport can also be more profitable. There is also a more direct reason. Ultimately, it is consumers who will pay if maritime transport becomes more costly. You and me. And since it often represents just 1 to 2% of the price of goods sold, we are already accepting those higher costs right now.

What can we do? Using LNG as a fuel with better properties (low CO2, no fine particulate matter) and no controversy (emissions generated by the extraction process). The use of new fuels (hydrogen, biogas, methanol, ammonia) is possible, but the main issue is that they must be “green”, i.e. the processes by which they are produced must not generate pollution. Electricity (batteries) is another option, but as elsewhere only as a hybrid solution. The major innovation, and the most surprising, is the return of sail power, although it is still too early to say whether it can be used on a mass scale.

It is difficult to say what the ships of the future will look like, but they are set to change, even though there are still many problems to be solved, from the availability of fuels and their environmental footprint, to their efficiency as a source of thrust. In addition, it is not just boats that are concerned by the change. Ports are also on the front line. By hosting ships, they are among the prime locations in terms of air pollution, and naturally the public, NGOs and local governments are pressing for change. The city-port needs to be able to breathe more easily.

The commercial port needs to answer a new demand. The first is cold ironing or shore power, to eliminate the pollution generated by ships themselves. The second is the production of the new energy sources that ships will use in the future. As industrial sites, ports will be natural locations for bio-energy production. Maritime cities, already active places with history and traditions, are now key hubs of innovation. Shipyards, ship owners, start-ups, and research centres form an ecosystems focused on the future. The ships and ports of the future are clearly on the agenda.

Port cities are not just tools for urban transformation or vehicles for the service-based economy. They must be the beating heart of innovation. Their public authorities therefore have an important role to play, by deploying solutions to support them (funding, land, governance, lobbying). Port cities are one of the cornerstones in the great changes sweeping through the maritime transport sector.