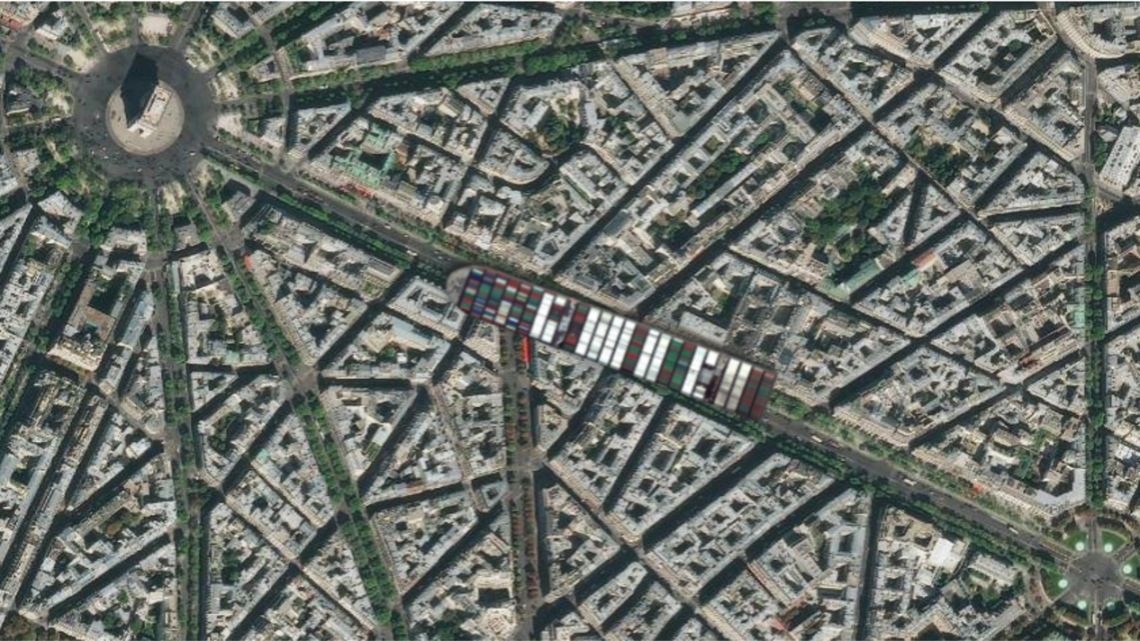 Nobody ever talks about it when the trains run on time… Nor does anyone talk about the 50,000 merchant ships sailing the oceans every day. But when a vast, 400 metre-long container ship blocks the Suez Canal, her prow lodged in the Egyptian sand, it provokes a press and social media storm. The world suddenly realises that what they had always assumed to be a well-oiled global maritime shipping machine, is in fact at the mercy of a gust of sandy desert wind! Is this another shot across the bows for shipping lines in their race for ever-bigger vessels?

The images, shared widely on social media, are striking. Ever Given’s extraordinary size is usually lost in the vastness of the ocean, or at the far ends of now inaccessible container terminals. But it takes on a whole new dimension when seen alongside the land machines (themselves impressive in scale) sent to dig the ship, and as some hasty writers would have it, global trade in its entirety, out of the hole in which she found herself. The incident has brought home to the entire world the dizzying proportions that global trade freighters have reached in recent decades.

It has also served as a reminder of just how important the planet’s fleet of merchant vessels is to the international trade that forms the lifeblood of our globalised economies. Maritime traffic through the Suez Canal and Red Sea into the Indian Ocean has increased by 300% in the last 20 years! Showcasing ports and global trade and the way in which they work is also one of the key roles of the Port Centers, promoted by AIVP. Visitors to these Centers have the chance to get a close-up look at these gigantic ships while docked. Alas, too few have taken advantage of the opportunity so far.

Port cities ceased to accommodate merchant vessels at their historic docks a long time ago, their basins having become ridiculously small in the last half-century or so. Architects, planners, and the tourist sector were quick to redevelop their “Old Ports” into fashionable waterfronts. The old maritime districts of port cities are now home to new activities, and a new lease of life. They are a planet-wide success story.

AIVP has been talking about these far-reaching changes to maritime shipping and their implications for port cities and regions for over 30 years.

The events of 9/11 led to the adoption of the ISPS code and ports being closed to the public.  Since then, few have realised the scale that international maritime trade has reached, and the resulting technical and logistical implications both on land and at sea. For example:

This in turn raises questions about our global economic and social model, which has encouraged the race towards megaships and bigger port infrastructures, often at the cost of balanced development for port cities and regions themselves.

If we continue to ship everyday consumer goods halfway around the world, along with all manner of manufactured products that are often unsustainable and unnecessary, we too could ultimately find ourselves stuck – in a spot that is only getting narrower with each passing day.