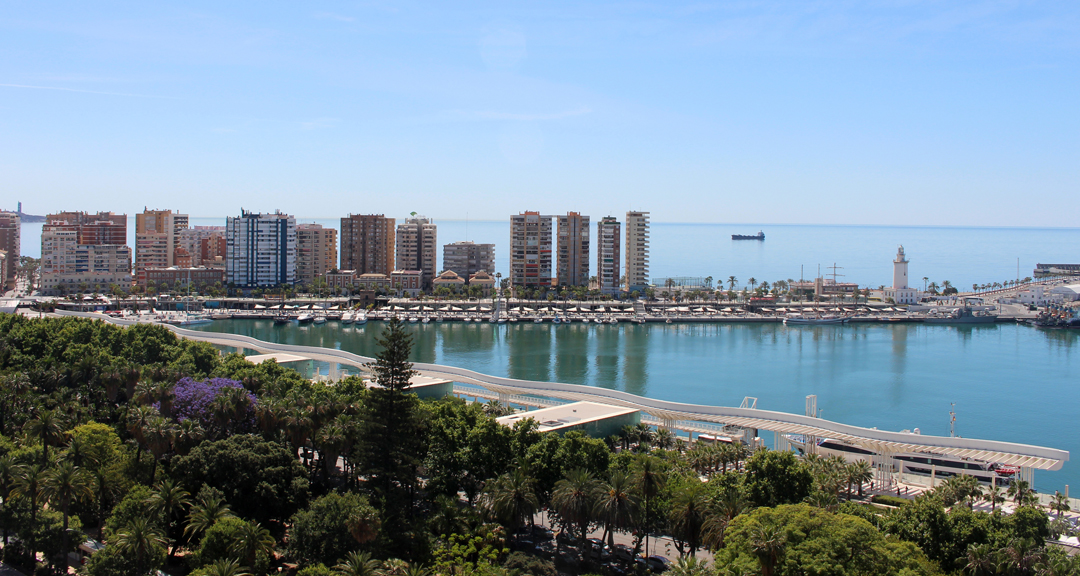 Following the webinar on 18 June 2020 on the return of cruise activity in our post-covid port cities, Dr. Pedro Marín Cots, Director of the Urban Environment Observatory of the city of Málaga (Spain), gives his point of view on the subject. In his characteristic direct style, he clearly thinks that they cannot return, especially following the same economic and tourist model from before the Covid-19. He raises several questions regarding the actual adaptation capacity and emphasizes that the real challenge is climate change, that we should not get distracted from it. This is indeed an opportunity to accelerate the necessary changes towards new economic and cultural behaviours.

After the webinar on 18th June, in which Leghorn, Bourdeaux and Tangier Ville showed so transparently the situation affecting cruise ship tourism, our answer to the question raised by José Sánchez in the introductory article to the seminar has to be “No”. No, we are not ready to start again, at least not in the way that we have experienced this economic and tourism activity in the past.

In the three ports mentioned above, the inhabitants are only now starting to recover the “new normality” after their confinement (in Tangier with a curfew); cruise ship activity has been similarly paralysed in all the ports of Europe and around the world.

In Málaga, strict health protection protocols forbid cruise ships from docking, and practically all the cruise lines have suspended their activities. Only MS Sovereign, belonging to Pullmantur, was anchored in the port with its crew on board for the two months of the strictest confinement; the population of Málaga will remember it for a long time, because at eight o’clock every evening it sounded its hooter in a salute to health professionals.

The picture that is appearing, although nobody knows when, is of cruise ship activity recovering basically for the national population of each country with small or mini cruise ships on tightly structured routes or tours, and tiresome obligatory safety measures like those applied in airports.

State or community regulations are developed at a general level, but they must be adapted to the reality of living with Covid-19 until an effective treatment is found. Despite whatever measures may be imposed, there is still much uncertainty. The fragility of the industry is evident. What happens if a passenger falls sick? Will the entire ship be placed in quarantine as is happening with the new outbreaks occurring in Germany, Italy or Portugal?

As was to be expected, environmental and climate issues related with Port Agendas have taken second place, as they have in the rest of the economy, when in fact the current pandemic is closely linked to the consequences of global warming.

Europe considered itself invulnerable to the viruses that have seriously affected other continents since the beginning of this century, some of the common Sars-Cov strain; but as the members of the United Nations IPCC indicate, rising temperatures lead to the transfer of microbes and viruses through animal species which used not to reach Europe. They allow tropical diseases like dengue fever or malaria, for example, to survive in comfortable Western Europe; furthermore, we must consider situations previously regarded as impossible, like the release of unknown dieases harboured in the Arctic or Siberian permafrost.

The heat wave which caused thousands of unexpected deaths in France and Germany in the early years of the century, the torrential rains we have experienced and the floods caused by high river and sea levels, will become increasingly common. No, it would be a tragic mistake to postpone the issues associated with the climate emergency on the excuse of economic recovery and jobs. Only ignorance, demagoguery or the openly selfish interests of financial groups, strongly reflected in the political class, can wave the phantasma of economic recovery in the face of the environment. The economy of the future – which is already the present – will be green or nothing. Covid-19 is also an opportunity to adopt new forms of economic and cultural behaviour more rapidly and energetically.

The tourist industry, using whatever type of transport, must reflect and recover the cultural sense and pursuit of knowledge which characterised its origins, when the people who visited other countries and learnt their customs were true travellers. Today’s tourist is very often the negation of the illustrated traveller.

Can anyone get to know a city or a territory in a stop-over of a few hours? Is it worth consuming such vast quantities of energy – with the corresponding CO2 emissions – for tourism as it has been practised all over the world in recent decades?

Does Walter Benjamin’s mercantilist consumption still have to be our currency? Covid-19 has shown us that we can live a quieter, less consumption-driven life, recovering the sensations of a friendly city, of closeness, that we had almost forgotten.

View of Pier 1 of the Port of Málaga on a normal day and during the confinement in April 2020. 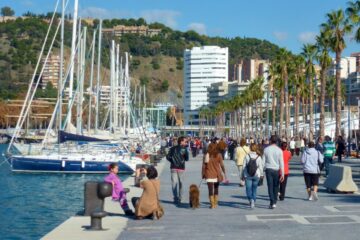 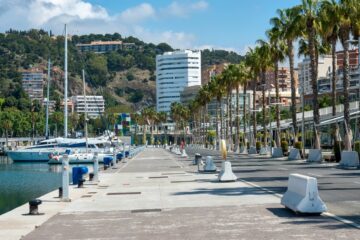