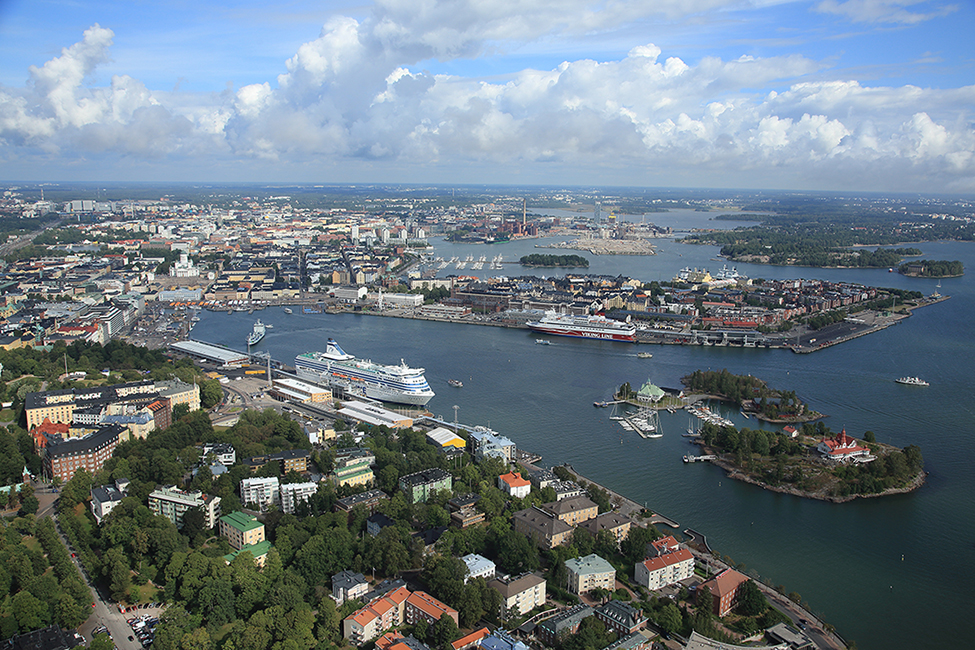 As several experts have pointed out before, the port-city interface is not just the physical boundary between port and city, but it can be considered more complex, considering the broader effects that port activities can have in the urban environment and the citizens. In this article by Satu Aatra from the Port Authority of Helsinki, we learn how the port is managing the different elements that form the complex port-city interface in the Finnish capital.

The city has, however, grown and become denser and at the same time the international urban trend of transferring harbours to the outskirts of cities has extended to Helsinki as well. The port gave out vast land areas in central Helsinki in exchange for Vuosaari cargo harbour which was opened in 2008, and has also since been decreasing harbour land areas in the heart of the city.

Finland depends on maritime connections and vessel and landside traffic infrastructure are essential for the economic and logistic network of port, businesses and transnational travel. In the Port of Helsinki, annually approximately 12 million passengers pass through the port on their business and leisure trips.

Ports have in many respects a human, built as well as environmental interface with the city and the wider society. Ports, as a spatial gateway between the city and the journey and often the first and the last view of the city, can be imagined as a business card of the urban space: what impression it gives, how it functions and how welcoming it is.

The economic, social and cultural interface could be referred to as the human interface, because the human activities and well-being are in the focus of life. Urban life is formed by the people, activities and built environment. The port and city human interface consists and creates a network of local, national and international connections, businesses and services which are connected to and supported by each other. In many ways it is like an invisible interface, yet it operates in the background and can be perceived as part of an active and lively city. Economic activities are also part of the social interface e.g. through tax revenue and by generating possibilities for service providers and job creation. Through the port passenger and visitor flow also the city culture can be diversified.

In Helsinki, the port creates international connections between different actors within the Helsinki metropolitan area and beyond. Additionally, the port has recognized the immaterial human perspective by building connections with local companies and inhabitants to create new activities and reciprocal acceptance and understanding to get an extensive picture of commonality.

Helsinki metropolitan area is the fastest growing region in Finland, and the majority of consumption goods, including food and medication, are imported via the Port of Helsinki. The port plays an active role in the logistic network of materials and goods reaching the metropolitan area businesses, services and customers fast. Also the range of products is considerably vast. And also, thanks to the port, people travelling through the port bring benefits to the urban area by using the local services.

Helsinki in Finland and Tallinn in Estonia create a wide economic twin city region. Frequent and efficient ferry connections between the two cities are an important human factor. This connection serves transportation of economically significant goods, business and leisure travel, the movement of workforce, cross-border connections and transnational mobility, while creating jobs and economic activities on both sides of the Baltic Sea.

The twin city concept is also an important port-to-port connection between the ports of Helsinki and Tallinn. The two ports share quite a substantial amount of port traffic and mutual development projects. In that respect, the interaction between the ports can be seen as a port-city interface since the activities add economic and social capital, and connections, contributing to the well-being of the region’s inhabitants. This added-value interaction emphasizes the importance of what we could consider the port to port interface.

Aiming to be a good neighbour has been an important goal guiding the actions of the Port of Helsinki. It means that there are frequent meetings with local communities, resident’s associations, schools and nurseries. Meetings with local communities and resident’s association cover ongoing themes of port impacts, land use, traffic and environmental issues. The co-operation with schools and nurseries is focusing more on information and port activities. Some great examples are a building site wall painted by local school pupils in Katajanokka and a cruise quay welcoming pennants also painted by local school pupils in Hernesaari Cruise Harbour.

The port – city built interface is formed by the different physical elements of the built environment: spatial arrangements, buildings, infrastructure and environmental aspects.

Port’s spatial arrangement and elements create a connection to the urban area and function as a spatial node in the cityscape. Passenger terminal buildings and harbour structures serve primarily the vessel traffic and in addition the coherent travel and transportation journey. Port buildings and harbour structures have also an architectural and engineering aspect: they showcase engineering masterpieces adding interesting technical details to spatial views.

The development of existing urban port areas is an important mutual exercise for the port and for the city. One good example in the Port of Helsinki was the development of West Harbour Terminal 2. The City of Helsinki’s West Harbour urban planners and building permit unit were active in co-operation with the port to find solutions for the creation of the new passenger building.

Improving accessibility in the central harbours is somewhat challenging in a compact city but in Helsinki the aim is to further develop port traffic system especially in the city centre harbours. The solutions should cover the TEN-T connections and improved accessibility to all forms of traffic (vehicles, public transport, pedestrians, cyclists). The port and other traffic users would benefit greatly from more accurate real-time traffic data and predictable traffic flow information.

So far the port and the city have improved traffic lights near the harbours by adjusting smart traffic light system to follow real-time vessel data and vehicle flow to the streets. There is also an ongoing smart junction study near the West Harbour aiming at a policy-based traffic optimisation in one of the busiest and complex street junction areas in Helsinki. The goal is to create a smart traffic solution to manage the optimisation of transport time, congestion, emissions, etc. and to create a mobile application available for everyone to follow the real-time information.

With frequent tram and national coach network connections, Helsinki city centre harbours have good public transport accessibility, complemented with city bikes and electric scooters. Public transport solutions have been developed together with the port, shipping companies and the Helsinki regional public transport agency. A similar system to Helsinki has been introduced also in Tallinn making the purchasing of the tickets and the use of the public transport system easier in the whole Helsinki – Tallinn region, adding a welcome user-based angle to travelling in these two cities.

GIS and many technical digital data are part of digital infrastructure interface. The port as part of the city operates partly on the city’s digital map and data platform. This enables accurate and up-to-date information regarding e.g. land lease areas. Many of the port infrastructure solutions (electricity, water supply and sewage etc.) are planned and realised together with the city officials and the necessary regional agencies.

To mitigate environmental impacts in the harbours the port has implemented other initiatives e.g. automooring devices and OPS systems, and enabled LNG fuelling.

The construction and opening of Vuosaari cargo harbour had an impact on the surrounding areas including Natura 2000 archipelago and some residential properties nearby. To mitigate vessel and operational noise, the port built a kilometre long and 13-meter-high acoustic noise barrier wall to the eastern side of the harbour. The wall is housing solar panels and works also as a viewpoint to the harbour and as a leisure fishing shore.

In the future there will be a lot of development for the port’s operational functions e.g. through extension of port land areas and intermodal transport chains, digitalisation, automation and passenger services. Digitalisation and automation will increase and improve the efficiency of the port operations and further limit the negative environmental impacts. Local, national and international transportation chains will be developed towards easily flowing traffic and traffic management services. Passenger services will be developed more and more towards smooth and convenient travelling through improved services with the focus on a seamless travel chain. All these issues will bring the port, the city and the urban community together to discuss new economic and technical possibilities and solutions.

The Port-City Interaction in Helsinki: acting on the different levels of the interface