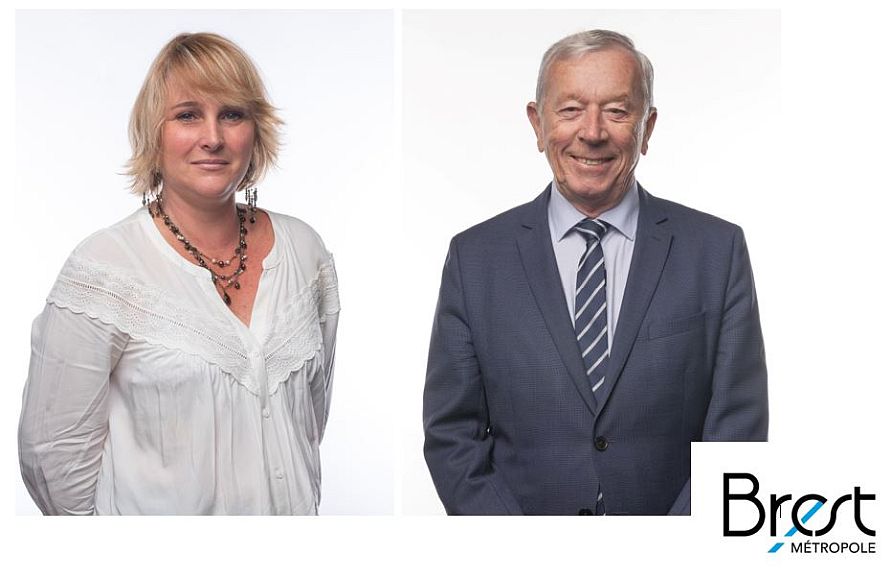 At the heart of the city of Brest, the district of Les Capucins was once a home to the local shipbuilding industry. With its strong maritime heritage, firmly anchored in the memories of the people of Brest, the area is now being redeveloped as an eco-district, a new hub of life, creativity and innovation. From the outset, the project sought to include local residents and all of the stakeholders concerned through a process of consultation. This approach is fully in line with Goal 8 of the AIVP 2030 Agenda. We were interested in learning more about the different aspects of this project, and the solutions adopted. So we spoke to Tifenn QUIGUER, Senior VP Planning at Brest Métropole, and Michel GOURTAY, Senior VP Economy.

Brest Métropole, the metropolitan authority of the Brest conurbation, has been a member of AIVP since 1990

AIVP – The former shipyard site that includes Le Plateau and Les Ateliers des Capucins is undergoing a radical transformation. What are the main lines of the redevelopment of this heritage site?

The Capucins project is at the heart of the metropolitan area, in the Quatre-Moulins district (population: 20,000). It sits on the fringe of so-called New National Programme for Urban Renewal (NPNRU) projects, namely “Quéliverzan/Recouvrance/Capucins” and “Bellevue/Bords de Penfeld”.

It is key to the deployment of the major urban development project “Cœur de métropole/Penfeld”, as it will serve to:

AIVP – The aim is also to create an eco-district. What solutions are being used to achieve that?

The project is at stage 3 of the “Ecoquartier” or “ecodistrict” certification process..
The priority was to transform an emblematic shipbuilding site into a new district for the city, a model in terms of quality, mixed-use functionality, and density, all as part of a sustainable development-oriented approach. This was to be done by:

AIVP – Focusing more closely on the Ateliers des Capucins, your priority was to make it a living space, but also a hub of creation and innovation. What facilities are planned or have already been installed? And how will they add to the city of Brest’s international attractiveness?

Les Ateliers des Capucins is an iconic Brest heritage site that is inextricably linked to the city’s history, the workers and the trade union movement. It has been transformed into a 2.7 hectare hub of culture, leisure and innovation with all kinds of amenities. These include:

All of these areas are laid out around a 10 000m² main central public space called “La Place des Machines”, which is covered and heated. It houses the majestic “Canot de l’empéreur”, a heritage piece from the collections of the Navy Museum, a vast skatepark, dance area, picnic area, spaces for exhibitions and public events, and more, which can be reserved privately for large events.

In short, it is a unique, exceptional, multi-purposes venue with major importance in terms of culture, the economy, leisure and tourism!

AIVP – Was the local population included in this major urban regeneration project, and how?

All of the local stakeholders (residents, institutions, economic operators, housing planners, cultural organisations, associations, etc.) were included in the project at every stage, from design through to realisation, starting as early as 2005 and continuing after the Ateliers des Capucins opened to the public:

AIVP – You placed a major emphasis on the historic identity and heritage of Les Capucins. But you also committed to an approach aimed at integrating existing or planned port activities into the local landscape. One example is the future marine renewable energy site, which will be completed by the addition of a promenade and viewing platform. What were the reasons behind that decision, and how are the maritime and industrial activities showcased?

The Region’s development plan for the port of Brest, with the participation of Brest Métropole, does indeed include a very significant landscape integration aspect.
Over 4.5 hectares of landscaping makes up the interface between the future industrial port terminal dedicated to marine renewables, and the Moulin Blanc tourism and water sports zone.
A landscaped embankment planted with vegetation, measuring 11 m high and 100 m long, provides pedestrians with unique views of the planned industrial activities at the heart of a 50 hectare enclosed site that had previously not been visible.
Planted with oaks, pines and birch trees, it also has one side that is off limited to the public. That side has been designed to recreate a biotope equivalent to that found on the polder before the work began.
Another component of the site’s landscaping is the viewing platform provides unmatched views of the roadstead and the marine activities that take place there all year round. Designed in the shape of an amphitheatre in consultation with local residents, the platform can be used for festive, musical, or cultural events.