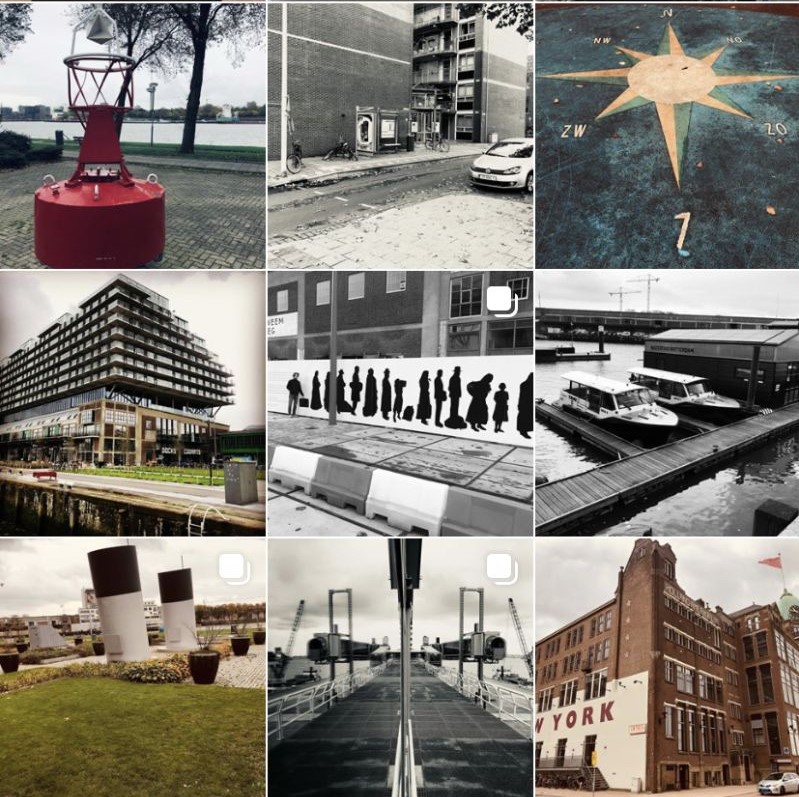 Being passionate about ports and port-cities doesn’t always make you realize that what you see is not what others see. When you talk to people on the streets in Rotterdam for many people the port is as abstract as a bank. You know that what they do is important in daily life, but take it for granted. This was exactly the case when we started redesigning the curriculum of our Minor Port Management & Logistics at the Erasmus University Rotterdam. How do we engage students with an economic, business or law background with the port-city? How can we make young academics make the connection between the past and the present in such a way that the younger generation gets engaged and finds a future in the port-city ecosystem?

How can we make the connection between the past and the present so that the younger generation will create the future in the port spaces we live and work in?

Instead of giving them just another paper assignment, we challenged students to explore the port-city territory itself and capture the stories, images and citizens’ testimonials on the waterfronts. The instructions were clear but left sufficient room for creativity: think of a specific theme such as the port expansion in the 19th century, iconic companies of yesterday, old to new port businesses, cranes, bridges, buildings which tell the story of maritime evolution and revolution and of course people’s traces through time. With that in mind we asked them to go out there and take as many pictures as they wanted, but always with a purpose and an explanation. To follow and document their endeavors, each team created an account on Instagram, thereby creating the first ever Port-City Instawalk, at least in Rotterdam. For each instawalk students the tasks was to design a promotional leaflet to invite other people like tourists to participate and experience Rotterdam on their own.

What we got back at the end of the 8 weeks was as surprising as refreshing and creative, a dozen of instawalks. These instawalks have the Maritime Museum in Rotterdam as the start or end and can be taken by foot, bicycle, even by waterbus. Of course the photos and videos on Instagram were the perfect experience of their port-city expeditions, but the story behind made the picture complete. If you imagine most of these youngsters had never been related to a port, or even Rotterdam, the findings were spot on. When taking a closer look, these students were able to see through the buildings and infrastructures, they realise how the port grew and made a transition to a new use. Despite the city changing, they still feel the maritime atmosphere. They even have gained an understanding how decisions were made in the 1950s when the Municipality of Rotterdam decided to build a tunnel instead of a bridge over the river. They realised that infrastructure is not wasted, but can also re-used, while leaving visible traces. The saw that old warehouses are left behind, but artists and entrepreneurial people take them over and refurbish the interior into something new. They visited neighborhoods and port villages such as Katendrecht, Heijplaat, Feijenoord and sensed a new spirit, the spirit of #makeithappen and how new crowds turn it into something new. The met people, young and old and came back with interviews, videos and sometimes. The even reported back from a rooftop of a skyscraper with the port-city at their feet.

Three virtues of the port-city instawalk

What is so academic about this educational experience? I see at least three virtues. To start with, this Minor Port Management & Maritime Logistics is a broadening minor. It serves to broaden the knowledge of economics and business students, who are yet to encounter what it is like to work in a particular industry. The instawalks turned out to be more than a port excursion, it became a close encounter with port city culture. For many of the students, it has ignited a spark of interest for a career into the port and maritime industry.

Secondly, the port-city interface is a research domain in itself. Many ports around the world struggle with the relation with their parent-city. There are numerous examples where autonomous development of the city on the one hand and the port on the other has led to a back-to-back position. The tensions which occur on the port-city interface is often caused by the scarcity for space, but is also about a transition from traditional to new purpose. Port functions may change over the life span of a spatial area, which could lead to tensions and conflicts between stakeholders. On the contrary, if coordinated well this tension can also lead to creativity. The challenge for the students was to capture these rough edges to provoke new viewpoints on creative ways of dealing with these tensions.

The third virtue is curiosity. Curiosity may be one of the best intrinsic skillsets a person can have. The assignment turned out to be a discovery which opened new perspectives, triggered thoughts, and allowed for new connections between concepts which did not seem to be connected for the students. Lastly, curiosity addressed multiple senses at the same time in the learning process and the more connections are made, the better the experience settles in the minds.

Did the port-city instawalk realise our objectives? The truth is in the eye of the beholder, but the interlinkages between the port and city is undoubtedly out there. A curious mind will be mesmerized by the port city culture at plein sight. It is a matter of learning how to see they are connected, just like everything else.

If you’re interested in setting up your own port-city instawalk, or any other educational event or activity to engage the younger generation, feel free to contact me.

Maurice Jansen is senior researcher at Erasmus Urban, Port and Transport Economics and member of the LDE PortCityFutures research community.

Note: An instawalk is a touristic walk, which is usually organized by a guide and photographer and lets participants experience a particular part of a city or landscape. While people make their pictures, they are posted instantly on social media, usually Instagram. By doing so, the instawalk follows a specific photo trail, which serves as a footage of the experience itself.
If you’re interested in the Rotterdam port-city instawalks, please check the accounts:

Note: Instagram accounts from previous years may not be active anymore.