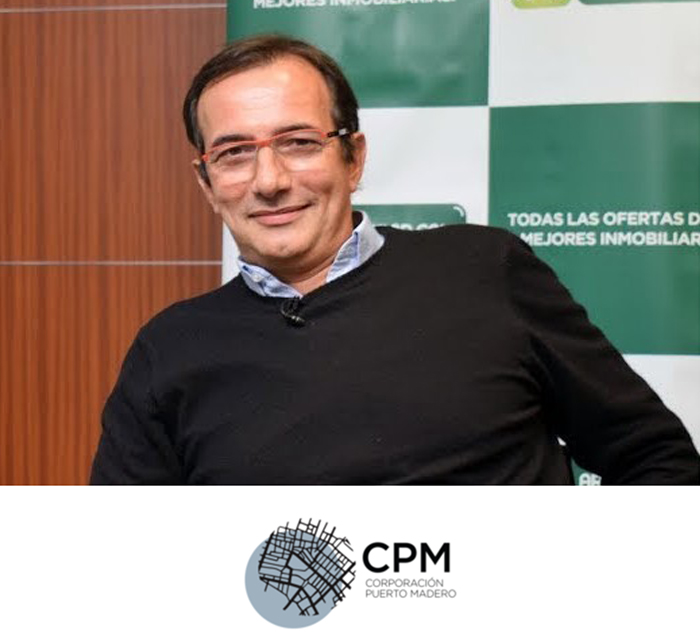 The Puerto Madero Corporation (CPM) was created in 1989 to urbanise and manage 170 Ha belonging to the old port. The many international prizes awarded in the last 30 years bear witness to the success of one of the largest waterfront transformation projects in Latin America. Today the Puerto Madero Corporation is involved in different urban regeneration projects in several Latin American cities, sharing the knowledge accumulated over these three decades. Port cities have evolved since the 1980s, and today mobility is one of the main issues. In this interview, Eduardo Albanese, Architect and Technical Manager, explains the mobility-related initiatives that the Puerto Madero Corporation is carrying out.

Corporación Puerto Madero has been a member of AIVP since 2017.

AIVP – Puerto Madero’s original Masterplan (PDF) is now practically 30 years old. Over this period the way in which urban spaces and city life are conceived has evolved enormously, particularly in terms of mobility. Do the main urbanisation decisions taken all that time ago still work, or has it been necessary to modify them? What have been the main changes in mobility that you have seen over these decades in Puerto Madero?

Eduardo Albanese, Technical Manager of Puerto Madero Corporation – The ideas expressed in the Masterplan have been developed and executed on the 170 hectares of Puerto Madero. They are present in the large public works carried out by the Corporation and in the quality, quantity and scale of the public space which has been integrated into the centre of Buenos Aires. It must be considered that the spirit of the project as originally drafted has been respected over these three decades, although other elements have been introduced consistent with policies that have been applied in the city.

In the last 5 years, CPM has carried out surface works at Paseo del Bajo, which was the last large road and city-planning project. This work has involved the inclusion of 10 new hectares of squares, parks and promenades on the north-south axis, structured by the urban highway combining two avenues: Madero-Huergo and Alicia Moreau de Justo. In city-planning terms, it has connected the northern and southern parts of the city of Buenos Aires, while also forming the definitive east-west connection between the Puerto Madero quarter and the city centre.

As part of the Paseo del Bajo works, a further 10 hectares of parks and squares bordering the Puerto Madero quarter to the west have also been remodelled, bringing the total public space of this unified city zone to 20 hectares.

AIVP – In Buenos Aires, “combis” (minibuses) are widely used for public transport as an alternative to private cars. How have these vehicles been built into the Puerto Madero plan, and how is the area connected with the rest of the city?

Eduardo Albanese, Puerto Madero Corporation – Just seven years ago, an agreement between the CPM and the City Council led to the installation of a new combi terminal on land owned by the CPM at the corner of Av. Corrientes and Av. Madero, opposite Luna Park and CCK. This terminal, which has enabled us to organise and centralise the passenger transport activities of the combis, is strategically located not only in the nerve-centre of central Buenos Aires, but also 100 metres from a “Subte” (metro) station and a large number of bus stops.

AIVP – In recent years, and even more with the impact of Covid-19, we have seen that bicycles are being widely adopted as a more sustainable alternative for mobility. The City Council of Buenos Aires has launched various programmes to support the urban use of bicycles, such as the “Friends of Safe, Sustainable Mobility Programme”, for example. What projects are being run in Puerto Madero to support the use of bicycles for urban mobility?

Eduardo Albanese, Puerto Madero Corporation – To start with, all the works carried out in Paseo del Bajo and the surrounding area have included bicycle lanes and bicycle use as part of the proposed new public space project. This development includes a different spatial and pedestrian organisation, with high levels of connectivity, and links the whole area to the general bicycle lane circuit of the city.

Furthermore, the “BA Bici” programme is being implemented in Puerto Madero as in the rest of the city, offering a free community network of bicycles for short journeys between different points. The Puerto Madero quarter contains several stations for collecting or returning bicycles.

AIVP – The presence of water is a determining feature of Puerto Madero. In many cases around the world we see that navigable waterways are also becoming a resource for sustainable mobility. We would like to know whether projects are being developed in Puerto Madero to encourage the use of ferries or launches for passenger transport or last-mile delivery of goods.

Eduardo Albanese, Puerto Madero Corporation – This is a pending item. Attempts have been made to start a tourist circuit up and down the river, and public transport services along the whole coastline of the River Plate from Ciudad de La Plata to Tigre (Parana Delta). So far this exists only in a very incipient form; it is not yet consolidated. Without doubt it is an opportunity for the future.

AIVP – Many Argentinean and international companies have offices in Puerto Madero, with thousands of employees working there. We have seen that to create a more sustainable mobility that works, it is essential to coordinate efforts between public institutions, users and companies. Are there any examples of this type of coordination in Puerto Madero? What types of solution does the private sector propose to achieve more sustainable mobility?

Eduardo Albanese, Puerto Madero Corporation – The Paseo del Bajo works have delivered excellent urban articulation between the Puerto Madero quarter and the rest of Buenos Aires. So although bus lines and other forms of public transport have not yet been introduced into the quarter, very good, wide coverage of the new public space has been achieved.

AIVP – One of the main features of Puerto Madero (PDF) is the variety of high quality public spaces that it offers. When we talk about sustainable mobility we must never forget to include the creation of spaces that invite people to walk while ensuring safety and access. What are the main characteristics or special care that must be taken in these spaces to attract the city’s inhabitants to use them?

Eduardo Albanese, Puerto Madero Corporation – We believe that the architectural design of the public spaces in Puerto Madero has played a vital role in this. This design was based on a cultural study of the possibilities for use, the architectural scale, the attractiveness of the whole and recognition of its urban nature. We also believe that the quality of the constructions, the materials used and the urban furniture are fundamental for the effective use of space that has been achieved. Finally, landscaping studies were carried out to determine which plant species to use and how, always preferring local indigenous flora.

Unlike most city spaces, the Puerto Madero quarter was projected as a whole, with a central idea around which the development was articulated. Among the guiding lines of this idea were the quantity and quality of the public spaces, which have resulted in the characteristic boulevards, promenades and parks which beautify the urban experience and invite people to immerse themselves in the area. 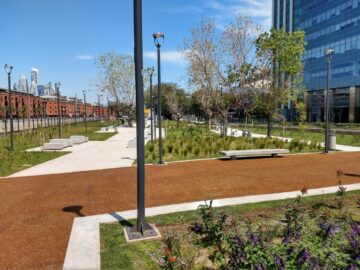 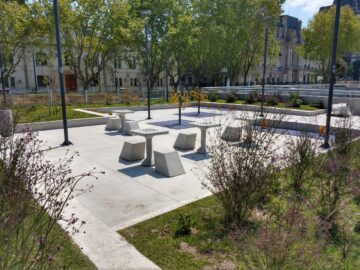 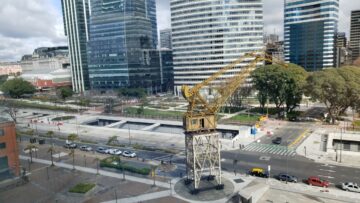