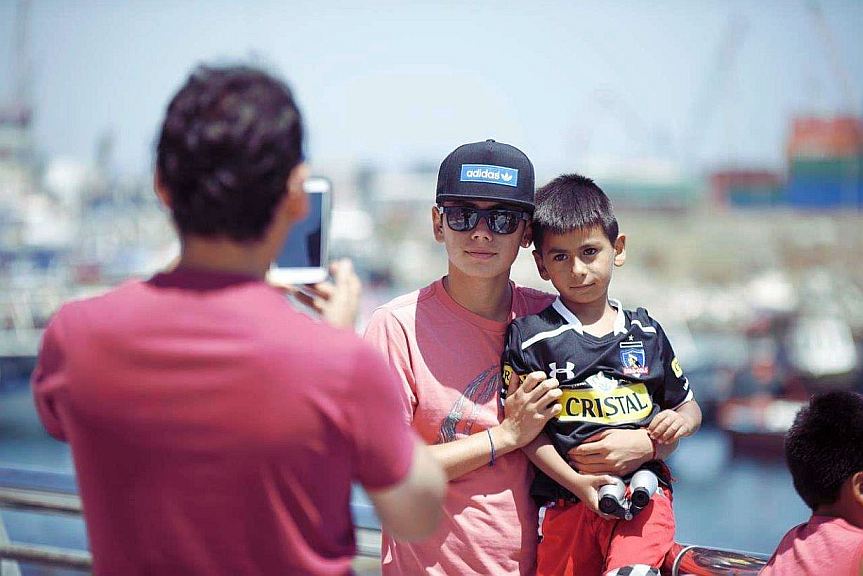 Empresa Portuaria San Antonio is member of AIVP since 2011.

The Port of San Antonio, Chile’s first port by tonnage, aims not only to increase the volume of goods handled but also to ensure the development of human capital, essential criteria for ensuring competitiveness. The port also seeks to strengthen the link with the community and to promote the port city integration through citizen participation. The modification of the Urban Development Plan, in which the Port of San Antonio carried out an extensive participation program including a hundred meetings, is a perfect example.

The city and the port of San Antonio

Located in the Fifth Region of Chile, the city of San Antonio is framed by the Andes Mountain Range and the Pacific Ocean. More than 125,896 of Chile’s 16 million inhabitants live there. San Antonio is 108 kilometres west of Santiago, the capital of Chile, and is linked to it by Ruta 78, known as the ‘Autopista del Sol’ (“Highway of the Sun”). The port, the main activity of San Antonio, is situated within a natural bay, together with related industries and services. The city is also home to activity in the small-scale fishing, gastronomy, agriculture, viticulture and summer tourism sectors.

Chile has ten State-owned public ports. San Antonio is one of them. It handles 40% of the national cargo throughput.
In 2015, San Antonio Port maintained its position as fourth biggest contributor to the State, registering earnings of USD$18.6 million, an amount surpassed only by Codelco (mining), Enap (petroleum) and Banco Estado (finance).
It also maintained its position as most profitable public port, from amongst Chile’s ten public ports. 2015 saw it grow 7.7% on the previous year.

Moving more than 17 million tonnes in 2015, San Antonio Port is the biggest port in Chile in terms of cargo throughput, and the only one in Chile with three concessioned terminals – Puerto Central, San Antonio Terminal Internacional (STI) and Puerto Panul. In 2015 it maintained its position as the sixth port in Latin America in terms of container transport, according to the Economic Commission for Latin America (ECLAC). It offers multipurpose services including container transport, bulk cargo and solid and liquid bulk operations.
Located on the West Coast of Latin America, San Antonio Port enjoys assets commending it to Chile’s foreign trade including its strategic location – it is the closest port to the country’s main production and consumption centres – excellent transport links, a cooperation agreement to strengthen rail connectivity, favourable topographical conditions and many areas available to project port infrastructure growth and integration.

Together with the growth of international trade with Chile in recent decades, the importance of San Antonio as a port has continued to grow. Port activity is the main driver of the local economy, and its direct and indirect contribution to local GDP is estimated to reach 50%.
In 2015, two of our three concessions made significant progress in their expansion plans. Puerto Central completed phase 1 of its 700 metres of new mooring stations on the Costanera Norte wharf. STI, meanwhile, is currently building an additional 130 metres of new mooring stations, bringing it to a total of 900 metres by 2018. Both investments total US$600 million and aim to duplicate transport capacity in San Antonio Port in the coming years.
In terms of productivity, 2015 saw the Puerto Central and STI concessions acquire new cranes. Two of these, on the STI concession, are the biggest in operation in Latin America. This type of investment, together with the increased moorings and hinterland spaces at the heart of the concessions’ development plans, are fundamental to ensuring the highest standards of service and competitiveness in terms of costs.

San Antonio Port has taken care to work together with the concessions, syndicates and port workers to address issues of common concern through dialogue, consensus and agreement. The company, moreover, coordinates a Joint Committee made up on concessions, syndicates and workers. The results from the period are pleasing: an accident rate below the industry average and no serious accidents.

Between July and August 2015, San Antonio Port carried out a survey of 400 local residents, over the age of 15, in order to learn about the community’s perception on maritime activity. A high percentage of respondents said they knew about the expansion project known as “Megapuerto”, “Puerto Gran Escala” or “PGE”, and had a positive view of it.
The project plans new port infrastructure for the southern part of the current site. This will be carried out phase by phase in line with increasing demand, and shall have a capacity of 6 million TEU’s per year, in addition to the port’s current capacity.

During 2015, San Antonio Port progressed various studies for this expansion project. It ordered studies in basic engineering and the environmental baseline, as well as other studies to define the business model for new port infrastructure and the pre-feasibility study to implement a multimodal cargo corridor to connect the port with Santiago. In the first trimester of 2016, San Antonio Port bid for the drawing up of an Environmental Impact Assessment (EIA), and the corresponding “Resolución de Calificación Ambiental (RCA)” (a Resolution of Environmental Approval issued by the Chilean Environmental Evaluation Service) is expected in 2017.

Participation as a Tool to Encourage Port-City Integration

Growing community participation, through various means, in port operations, initiatives and projects has represented one of the main methods of increasing port-city integration in San Antonio in recent years.
One of the main milestones in this area was the approval of the modification of the Municipal Development Plan of San Antonio in May 2014. This plan establishes the sectors necessary for the future development of the port and sets aside spaces for the development of the city. The modification of the Municipal Development Plan included an extensive process of Early Citizens’ Participation, involving more than 100 meetings with local residents, local and regional authorities and other interest groups. These types of events are fundamental for the achievement of a balanced and coordinated development between port and city.

San Antonio Port has, therefore, made two commitments that seek to create spaces for the community that contribute to the integral development of the community and improves the quality of life for all its inhabitants. These two initiatives are as follows:

In 2015, a series of meetings with authorities, neighbourhood associations and small-scale fishing unions took place with respect to the dredging project that began in October.
Between 2012 and 2015, on a consistent and regular basis, meetings have taken place at least twice a week with local actors to foster this relationship. The company also keeps up constant communication with the local community through its “open doors” policy.

Creating Public Spaces and the Using the Waterfront

One of the most sensitive issues in the relationship between ports and cities around the world is the use of the waterfront and the availability of waterfront public spaces for people to use.
Ever since 2006, San Antonio Port has managed the Paseo Bellamar, after having financed 90% of the modernisation of that waterfront public facility in early 2003. Paseo Bellamar is an open space for all the community, with 52 artisanal stalls, two cafes and snack bars.

Last year’s survey found that this initiative is highly valued by the people of San Antonio: more than half of those surveyed considered Paseo Bellamar to be “the most symbolic” part of San Antonio, and a high percentage said the redevelopment of Paseo Bellamar was the best change to the city in recent times.
The community’s response demonstrates the importance of preserving and encouraging public spaces that allow citizens to remain in direct contact with the waterfront. These spaces are the foremost interaction points between port and city.

Without doubt, participation initiatives have contributed to greater integration between port and city, and the creation of common view of the future development of San Antonio.

« What this Municipal Development Plan has achieved is this port-city vision. We understand that the city sustains the port, and the port sustains the city, in a harmonious, sustainable and, of course, balanced atmosphere »

declared the Mayor of San Antonio, Omar Vera, in a speech at the XXIV Latin American Ports Congress, which took place in Arica in December of last year.

Moreover, more than half of those who participated in last year’s survey stated that the port and activities related to it are what drive development in the city. A significant percentage classed the port’s commitment to the city as “positive”.

There is, however, room for improvement in several areas where port-city integration in San Antonio needs to be deepened, such as public health, technical education, urban transport, public spaces and green areas. Due to their nature, the port cannot approach these challenges unilaterally. Rather they require cooperation, dialogue and agreement between authorities, social organisations, the private sector and the community.

« The experience we have gained in recent years has demonstrated the value created by participation, in a transparent and mutually respectful atmosphere, between the various players. We are sure that this is the path to follow in the deepening of port-city integration in the coming decades »