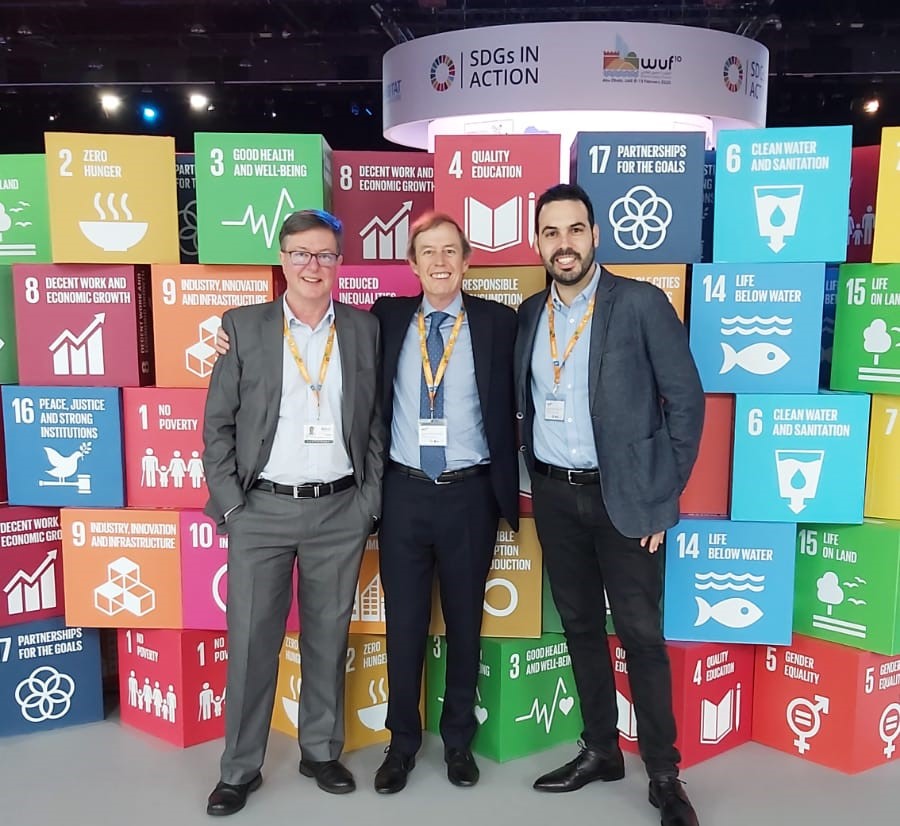 From 8 to 13 of February, the World Urban Forum, organized by UN-Habitat, gathered more than 17,000 participants and speakers in Abu Dhabi. AIVP ran a panel discussion about the AIVP Agenda 2030 with the international community, and has signed a Memorandum of Understanding (MoU) with UN-Habitat.

Never were the stakes so high, never were we more motivated to raise the voice and discuss port cities at the highest political institutions. That’s why AIVP, represented by its President Mr Philippe MATTHIS, its General Manager Olivier LEMAIRE, and its external strategic adviser José SANCHEZ, has participated in the 10th edition of the World Urban Forum (WUF) and has started cooperating more closely with UN Habitat.

The WUF is the main global event to take the pulse to the debate on sustainable urban development. This international meeting is organized by UN-Habitat, the United Nations agency responsible for human settlements. Its goal is to advance sustainable urbanization as a driver of development and peace to improve living conditions for all. UN-Habitat has been leading the global discussion about sustainable urban development, with initiatives like the New Urban Agenda. Considering the global reach of the AIVP Agenda 2030, AIVP went to Abu Dhabi and explained what is happening in port cities and why they are crucial stages for sustainable development. If in 2020 we have started what is called the #decadeofaction, port cities are at the forefront of the innovations we need to safe our world.

MoU signing between AIVP and UN-Habitat: A new cooperation for sustainable port cities

In the past years, AIVP and UN-Habitat have been working together, mostly to hear the voice of this global organization in the AIVP conferences. However, both institutions agreed that it was the time to take a step forward and have a more structured cooperation for the years to come. The Signature of a MoU reassure the presence of representatives of both organizations in each other’s events, where port cities are discussed. Other main points will include co-edited publications, joint research projects, and preparing a new declaration for sustainable port city relationships. Further actions are being studied and will be announced accordingly.

AIVP has defended numerous times that port cities are representatives of sustainable development. It is clear to anybody that lives or knows a port city, how these territories are well connected and how they are affected by the decision that may be taken thousands of kilometres away.

For this reason, we organized a panel discussion on Monday 10th of February entitled “Port Cities as proxies for global Sustainable Development the AIVP Agenda 2030”. The main discussion topic was the connection between global initiatives, like the AIVP Agenda 2030 or New Urban Agenda and the national, regional and local actions.

Mr. Marco Kamiya, Head of the Urban Economy and finance branch of UN Habitat emphasized the importance of global leadership of organizations like UN or AIVP, as well as the knowledge flow that we have provided for many decades (access to the PDF presentation here). This perspective reinforced the initial declaration of AIVP’s president indicating the motivation behind the AIVP Agenda 2030 and its success, already supported by more than 80 organizations worldwide.

At the national level, we learned how the National Observatory of Coastal Cities and Ports of Mozambique will provide a new space for dialogue on port-city relationships and help local actors to access relevant knowledge (Access to the PDF presentation here).

Going closer into the regional scale, Ms. Leproust-Houllier, from Le Havre Seine Métropole (France), showed the transformation that the Smart-Port City Le Havre is taking forward in the Normandy region. The program includes several projects aiming at energy transition, new sustainable mobility and innovative governance. More concretely, port, city and region are working together with companies in projects focused on producing wind energy in port maritime areas, raising awareness and protecting the the local biodiversity, or implementing a platform for Smart Data Services (Access to the PDF presentation here).

The presentation from Mr. Pedro Marin Cots, from Malaga Municipality (Spain), showed the opportunities that emerge when port and city work together to redevelop the waterfront, opening it up for the local citizens. However, as he also mentioned, this success must also be managed. The positive economic impact of new tourism implies challenges, such as urban massification and excessive touristification of the city centre. At the same time, the port is also contributing to the zero emissions goal, with specific actions, such as the electrification of quays. (Access to the PDF presentation here).

Among the attendee, Mr. Amadou Ka, President of the port of Dakar (Senegal) explained the challenges that African port cities are facing and how they must be inspired by other cases but also, how they need to develop their own solutions. Mr. Hugues Parant, General manager at Euromediterranée (France), on the other hand, indicated that ports cities need to take more into consideration the new rhythms of societal transformation, that are more easily understood in urban settings, while ports have a hard time keeping up. Indeed the society is changing so fast, with a speed that has never been seen before. And it can be challenging to follow the rhythm in terms of infrastructures, economy, etc.

The bottom line of the session, and in general terms of the conference, was that port city actors are indeed taking actions for sustainable development, but, as Mr. Marin Cots said, it needs to be done quickly, since we are running out of time!

A successful participation with new collaboration and partners in the horizon

Our participation in the WUF provided as well many positive contacts that open up new collaborations. The French delegation coordinated by the French Partnership for Cities and Territories (PFVT), gave an excellent base to all organizations based in France, concerned with urban development, and facilitated the organization of events as well as contacts with national counterparts. The final declaration of the WUF reflects the discussions of all sessions, including AIVP’s. We, of course, fully agrees with the statements mentioned and will work to carry them out.

After this intense week, we can say that we look forward to the next WUF in Katowice, Poland, in 2022, to continue working for port cities around the globe.

MoU signing between AIVP and UN-Habitat: A new cooperation for sustainable port cities Port Cities as proxies for global Sustainable Development the AIVP Agenda 2030 A successful participation with new collaboration and partners in the horizon