Occupied and empty spaces, visual perspectives, building heights and volumetric shapes are all factors that can be altered in order to optimise the way city/port interface sites are integrated into the existing urban and port context. With careful planning, it is possible to preserve and/or create visual perspectives of the water, dock basins, reclaimed port patrimony, the port and its activities.

When it was founded in 1895, Le Port was originally a sole-purpose city, a tool organised specifically to further the economic development of the port and designed exclusively for the shipping of goods. During the 1960s, a dividing line gradually came to separate the city from the port and the sea. The railway closed down and buildings were erected around the dock basins, forming a physical and symbolic boundary with the city.
The election of a new city government in 1971 marked a change. The first master plan ushered in a new approach to planning, centred on a commitment to creating a green, ocean-facing city. The new initiative was based on a major land acquisition programme that extended to over 75% of the territory. It inspired a project dubbed « Ville et Port, la ville est port » (City and Port, the city is the port), which in March 2000 led institutional partners to adopt a charter for its implementation.
With the objective being to break down the barriers between the city and its port, a radically new approach was required. The challenge was to transform the purely functional city, originally designed for the sole purpose of shipping, and to adopt a more permeable design with a new traffic layout and open spaces, opening up the waterfront area which would become a new point of interest in its own right. Another challenge involved consolidating the city to cope with population growth (from 40,000 residents to an expected 60,000 by 2020) in a limited space, while achieving energy self-sufficiency by 2030.
One of the major developments in response to these issues is the creation of a central thoroughfare, the « Mail de l’Océan », on which work began in spring 2009. It now runs through the city for 2 km from east to west. The new road will culminate at the Pointe des Galets, a public space designed around the three « Grandes maisons », large colonial-style houses, one of which may be turned into a museum. Overlooking the quays, there are plans for small blocks combining housing and shops. To satisfy the requirement for permeability, these blocks will be laid out in such a way as to preserve views of the port for neighbouring streets, while the buildings’ facades will be staggered down to the new sea front. 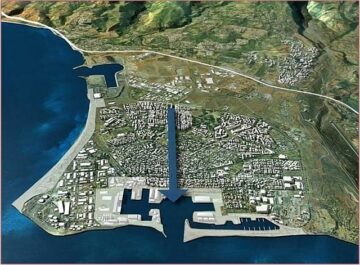 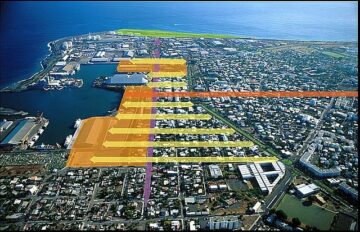 Integrating spaces and functions open to residents and visitors alike into port facilities, enhancing the visibility of the port and its activities.