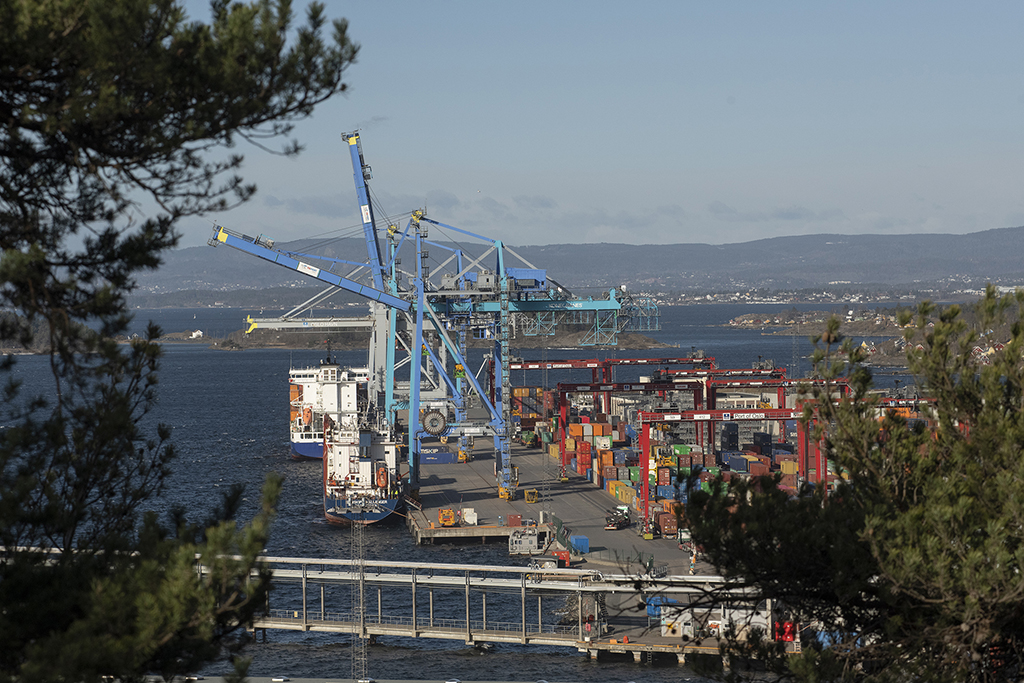 Port of Oslo is perhaps the first and only port to develop aesthetic guidelines for development of a port.

The guidelines provide direction for all aesthetic choices related to the harbor promenade and industrial port at Sydhavna.

In January 2000, Oslo City Council set aside a large tract of the port’s real estate holdings for urban development. Twenty years later, the nine-kilometer-long harbor promenade connects several, disparate sections of the waterfront, and provides residents of Oslo with easy access to a large recreation area.

Additional land is open for redevelopment through consolidation of the industrial port at Sydhavna, three kilometers from the city center. This will allow for extension of the harbor promenade, construction of residential housing and recreational areas featuring green spaces and swimming areas.

Fjordbyen presents architects, landscape architects, engineers and other professionals with a number of challenging and exciting aesthetic choices. As opportunities for urban development in and around the harbor gained momentum after the new millennium, the port needed a comprehensive plan to ensure aesthetic integrity.

Port of Oslo created aesthetic guidelines for Vippetangen (2012) and a streamlined industrial port at Sydhavna (2011). The guidelines for Vippetangen were superseded two years later by the, Harbor Promenade in Oslo – Principles and Strategic Plan. This plan, developed under the aegis of the City of Oslo, brought together key stakeholders whose businesses or activities are along or adjacent to the promenade. This approach helped ensure a unifying, comprehensive aesthetic guide for the entire promenade, including sections not operated and maintained by Port of Oslo.

Aesthetic guidelines cover everything from signage to large construction projects and road building. Guidelines were also established for structures, including color schemes, for silos and container cranes in Sydhavna. One goal is to preserve and develop the aesthetic potential of existing structures and provide overall guidelines for new construction.

In Byhavna, (City Harbor) the promenade will link the entire waterfront from west to east.

Adhering to the overall principles will help ensure each section of the Harbor Promenade has its own unique character. The guidelines place high importance on creating and developing the uniqueness of individual sections of the promenade, integrating spaces for public gatherings and activity, and exploring opportunities to increase public use and accessibility along the promenade.

Rådhusbrygge 2 is one of several piers providing direct access to the waterfront from Rådhusplassen, (City Hall Square). From here, one has magnificent views of the fortress and several islands in Oslo Fjord. “We wanted Rådhusbrygge 2 to be a unique landmark that facilitates public gatherings”, says Erlend Pehrson, landscape architect at Port of Oslo.

“Rådhusbrygge 2 is the most popular of the neighboring piers for recreation and public events. It has beautiful outdoor areas and playful elements integrated into the project. We used organic materials – cobblestones and wood, wove fishnets into rest places and used glass in sections of the pier, allowing visitors to look down into the water. The waterfront draws people away from the hustle and bustle of the city. They can relax and enjoy access to the harbor”, says Pehrson who was involved in the rehabilitation of Rådhusbrygge 2. 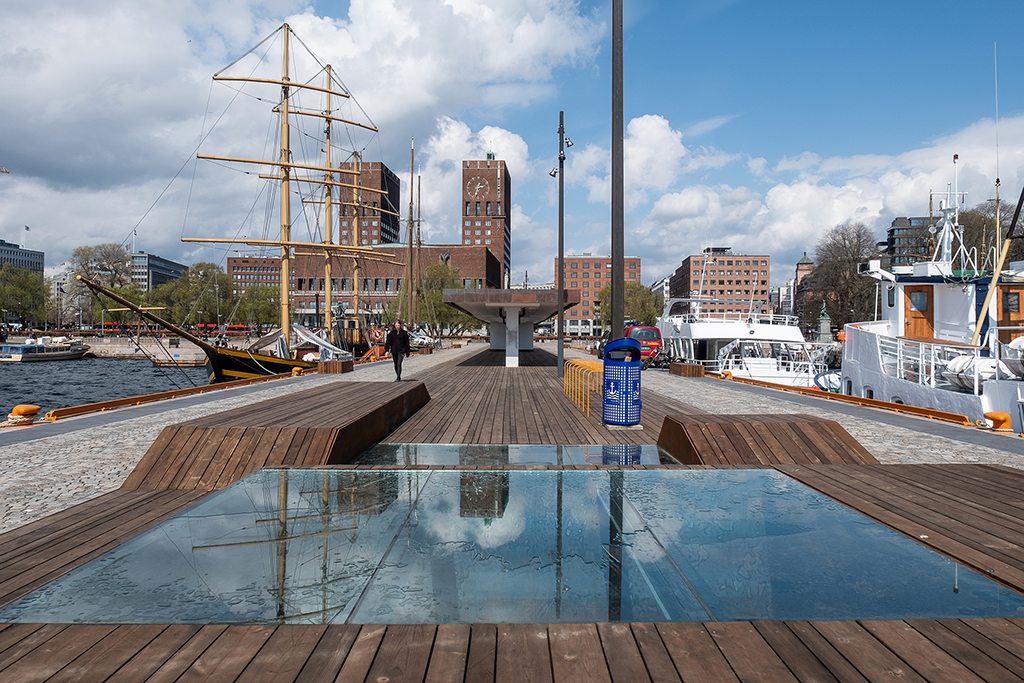 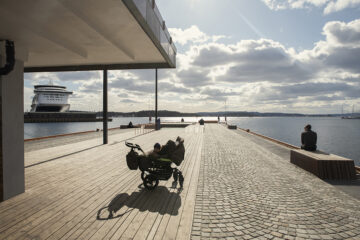 Prototyping to test ideas. Skur 13, formerly a paper warehouse, is a good example of a temporary test site.

“Skur 13 was not appropriate for industrial port operations because it was located in the city harbor. We suggested transforming it as a recreational center and entered into an agreement with the municipal environmental agency and Oslo Skateboard Association. The result is a hall catering to self-organized sports and activities such as skateboarding and cross-fit”, says Pehrson.

Port of Oslo’s real estate portfolio creates opportunities to facilitate development. Skur 13 has high visibility with an attractive location close to the city center. Its facade is used to showcase David Yarrow’s photographs.

The area around Vippetangen, straddling the area between Rådhusplassen and Bjørvika, features remnants of its former industrial roots, including a fishing hall and grain silo. The aesthetic guide notes that it was too far for the public to walk around Vippetangen without a place to warm up or buy something to eat. The food hall, Vippa (Skur 40), was built to address that issue. Skur 40 was earlier used to store goods seized by the Customs Service. 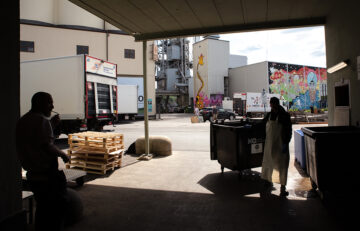 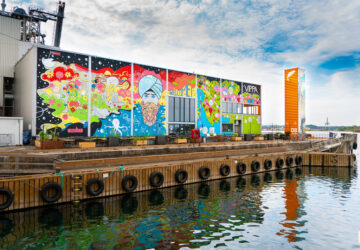 Gastenparken, a new park located at Akershusstranda, opened in 2019. The park is built around the Per Palle Storm sculpture, The Sailors, which has stood here since 1992. The sculpture commemorates all those who served in the Common Fleet (1510-1814) and the Royal Norwegian Navy (1814-1945). Gastenparken has plenty of public seating and a playful climbing sculpture to delight children and active adults. The park also has a clear environmental focus. Cobblestones made from recycled material and a flower meadow provide an organic feature while contributing to increased biodiversity in the city.

The industrial, urban container port on Sjursøya plays a vital role for Oslo and the surrounding region. This modern container port provides an efficient and environmentally friendly transport hub for consumer and industrial cargo. Maritime transport helps alleviate pollution and traffic congestion by reducing the number of trucks moving cargo into the city. Aesthetics are a high priority for an urban harbor with high visibility to the public from the waterways, the city, road corridors, and surrounding residential areas.

Guidelines for Sydhavna start with the idea that aesthetics must be rooted in logistics. The approach to logistics is similar to that used at airports, with simple and visible patterns. The assumption is that city residents see the port as a dynamic and exciting endeavor. Therefore, port operations should be visible to the city’s population and not hidden.

Sydhavna is in continuous, dynamic development, driven by the needs and requirements of the port’s customers. It is therefore difficult to establish a detailed, long-term plan for Sydhavna from an aesthetic perspective, as we cannot predict the types of buildings or infrastructure required to support future operations.

The guidelines are, nevertheless, a useful tool for architects and other professionals working on aesthetic and structural issues at Sydhavna. Architect Kjersti Olsen provides some examples of how the guidelines are being applied to development of the port areas.

“We want to leverage the function and identity of each structure to help inform design and aesthetics. We can only influence this to a certain extent for industrial buildings. Our influence should support the functional framework that follows from the business or activity”, says Olsen.

Port of Oslo’s role, as facilitator, can help highlight the beautiful shapes and scale of some of the structures. When choosing colors and lighting, we can emphasize what is most attractive and perhaps reduce the visibility of some less attractive elements. “Nordre Sjursøykai is especially important because it is so visible from the city”, says Olsen.

“The guidelines state that we must use atmospheric colors – such as gray blue and other light colors – to allow dominant structures such as silos and cranes to fade into the sky and surrounding environment. For example, Norcem’s silo system features industrial, blue-gray colors in three different shades – one light shade, a medium color and a dark tone. The goal is to emphasize the shapes of the silo”, says the architect.

“We mark gates and entrances with stronger colors or contrasting colors, often based on the customer’s own logo and graphic profile. This is an advantage in terms of logistics and security”, says Olsen.

Trees are planted along access roads. Two green parks / buffer zones have already been established. A third buffer zone will be ready in the next few years. Buffer zones help mark the boundaries between the industrial port operations in Sydhavna and the surrounding areas. They also help shield neighbors from noise created by the port’s operations, and establish a clear distinction between the city and industrial harbor area.

“Trees and green buffer zones are important. We can use vegetation as a structural element to create order, and emphasize logistics lines and transport patterns. Trees and vegetation also add a softer dimension to the rough industrial areas. As the trees along the access road grow larger they expand the positive impact of the buffer zone”, concludes Kjersti Olsen.

Port aesthetics matter. What can we learn from Oslo?