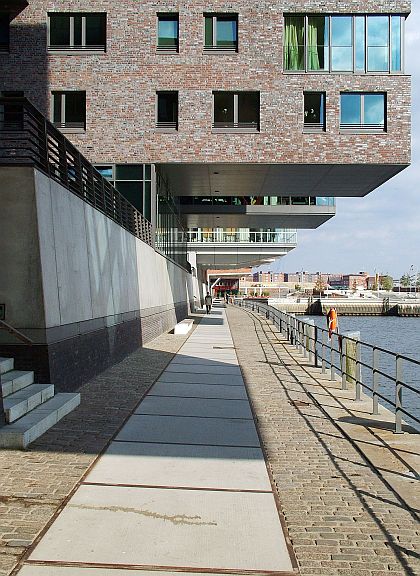 The Hafen City project in Hamburg is currently one of the largest urban redevelopment projects in Europe. By the early 1990s, dock basins had become too small to accommodate increasingly large vessels. This led the port of Hamburg, like many other port cities, to move to a much larger site near the Old Elbe Tunnel area.

The abandonment of the old 157 hectare site in the heart of the city offered a unique urban redevelopment opportunity. Under the master plan produced in 2000 by KCAP Architects and Planners, in association with ASTOC Cologne, a total of eleven districts and one new residential area are planned by the mid-2020s, providing housing for up to 12,000 residents and creating 40,000 new jobs.
This new urban area is surrounded on all sides by the river and the canals. The master plan emphasises the need to preserve the site’s unique character and maritime atmosphere. But since the site is regularly exposed to flooding of the Elbe, it also needed to take into account the risk of submersion.

The designers’ response was the « Floating City », a concept that combines several solutions: