The use of symbolic or typical architecture for new buildings is an increasingly widespread solution in areas where cities and ports meet. This new architectural approach aims to galvanise the image of port cities. It may also involve enlisting the talents of renowned architects. By opting for bold and original designs, port cities can pique the curiosity of visitors and stimulate areas where the port and city meet, by creating references to a clear identity.

The amphitheatre designed by Montreal-based architect Paul Laurendeau was built on the site of a former paper factory at the confluence of the Saint Lawrence and the Saint-Maurice. Cirque du soleil performed an exclusive show to mark the building’s completion in 2015. The landscaping and signage were finalised in October 2016. Since then, it has become an iconic urban landmark with its vast 7200 m2 red roof seemingly floating above the 3500 seat arena. There are a further 5200 seats on the adjacent lawns. The combination of interior and exterior spaces contributes to the new identity of this waterfront venue. 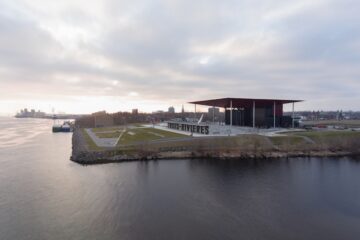 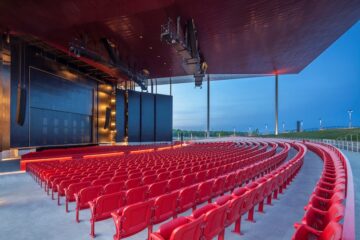 Trois-Rivières (Canada): an amphitheatre is now an iconic urban venue